Nickelodeon Brings Dora the Explorer ‘Into the City’

Nickelodeon takes world’s most beloved explorer on her biggest adventure yet with brand-new preschool series ‘Dora and Friends: Into the City’ debuting this August. 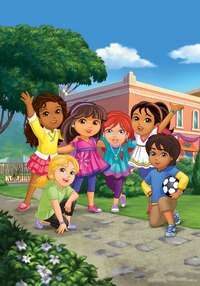 Global phenomenon Dora sets off on her next big adventure in Dora and Friends: Into the City!, a brand-new animated preschool series starring the Latina heroine in new adventures, with new friends and a new interactive curriculum, premiering this August on Nickelodeon.

The half-hour series (20 episodes) features the iconic character Dora living in a city, attending school and at the center of a peer group that works together to give back to the community--having both real-life and magical adventures along the way. Created by Chris Gifford and Valerie Walsh Valdes (Dora the Explorer, Go, Diego, Go!), the series will regularly air weekdays during the preschool block on Nickelodeon. The Dora the Explorer series, which after 14 years remains the most-watched preschool show on TV, will continue to air.

Developed with the support of educational experts and tested by preschoolers themselves, Dora and Friends is set to a contemporary soundtrack of Latin-influenced pop music and features an interactive curriculum focusing on community service, problem solving, emotional skills, Spanish language and Latino culture.

Set in the fictional city of Playa Verde, Dora and her friends go on adventures, whether it’s rescuing a lost stuffed monkey for a little boy in the hospital or returning a ring to an ancient Mayan Princess.  Throughout her journeys, Dora uses Map App on her smartphone and a magical charm bracelet to navigate the city and overcome any obstacle.  In the new series, Dora continues to be a good friend, leader, and problem-solver with a group of new friends–Kate, Naiya, Emma, Alana and Pablo-who share her passion for learning and exploring.