Network unveils aggressive set of greenlights and new series announcements at virtual upfront show, as it continues to expand across the kids and families entertainment space. 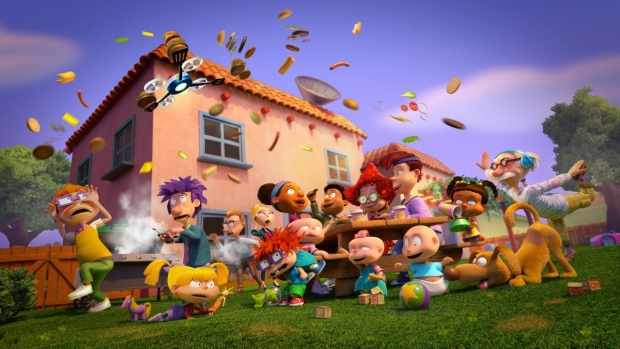 Nickelodeon laid out the largest slate of animated programming in its history yesterday at the network’s virtual upfronts, The Nickelodeon Virtual Upfront Show: Bring Your Kids!, outlining its strategy to expand across its own and third-party platforms; grow the footprint and influence of its global franchises; and launch its planned programming for the 2021-22 season and beyond.

“We’re applying our commitment to creating relatable characters and content to our upfront presentation so our partners can experience Nickelodeon exactly the way kids do, with surprise, humor and relevance,” said Brian Robbins, President, ViacomCBS Kids & Family. “The fragmentation across linear only accelerated these past 12 months, so this year’s format literally illustrates our strategy to marshal our global franchises, co-viewing strengths and our new content slate across all available platforms.”

The long list of animated shows (as well as live-action not included here) shared by the network reaffirms its commitment to aggressive expansion through investment in and production of content for every key platform that is important to kids, including linear, where Nick dominates the top 10 across every kids’ demo; Paramount+, which houses 7,000+ episodes of Nick’s library and a growing slate of all-new original shows; Pluto TV, which programs Nick content across its kids’ channels; YouTube, with five new Nick channels launched this year; and SVOD, where viewers can sample key content offerings.

“While linear is still the largest reach vehicle for kids and our ubiquity there remains strong, our strategy to have Nick content across platforms outside of our own allows us to meet kids wherever they are, fill their increasing demand for more content, and ultimately bring them back to our brand for more,” Robbins added.

Kamp Koral: SpongeBob’s Under Years (available now on Paramount+; premieres September 2021 on Nickelodeon) – This CG-animated prequel marks the first-ever SpongeBob SquarePants spinoff and follows 10-year-old SpongeBob SquarePants and his pals during summer sleepaway camp where they spend their time building underwater campfires, catching wild jellyfish and swimming in Lake Yuckymuck at the craziest camp in the kelp forest. Nick has picked up an additional 13 episodes of the series, bring the total season one order to 26.

Rugrats (premieres spring 2021 on Paramount+, followed by a later premiere on Nickelodeon) – This reimagining of Nick’s iconic ‘90s hit will reunite members of the original voice cast and follow the iconic crew of toddlers--Tommy Pickles, Chuckie Finster, Angelica Pickles, Susie Carmichael, and twins Phil and Lil DeVille--throughout their day-to-day lives that become adventures in their minds. The Patrick Star Show (premieres July 2021 on Nickelodeon) – The second spinoff of the number-one animated series SpongeBob SquarePants is a family sitcom starring Patrick (Bill Fagerbakke) and the rest of his family, as they are constantly disrupted by Patrick’s wild whims and surreal imagination.

Big Nate (premieres September 2021 on Nickelodeon) – Based on the best-selling children’s books, written and drawn by acclaimed author and cartoonist Lincoln Peirce, this new TV series will feature brand-new original storylines centered on Nate, a precocious 11-year-old boy, and his mischievous shenanigans that usually result in disaster, detention or both.

The Smurfs TV series (premieres October 2021 on Nickelodeon) – Based on the iconic property and in partnership with LAFIG Belgium and IMPS, The Smurfs is a brand-new original CG-animated TV series following Papa Smurf, Smurfette, Brainy, Hefty, Clumsy and others, on all-new adventures, packed with humor, heart and high-stakes action. Star Trek: Prodigy (premieres 2021 on Paramount+) – An expansion of the Star Trek Universe, the new CG-animated series follows a motley crew of young aliens who must figure out how to work together while navigating a greater galaxy, in search for a better future. Star Trek: Prodigy is from CBS’ Eye Animation Productions, CBS Studios’ new animation arm; Nickelodeon Animation Studio; Secret Hideout; and Roddenberry Entertainment.

Monster High TV series (premieres 2022 on Nickelodeon) – Mattel, Inc. and Nickelodeon are producing a brand-new animated series based on Monster High, the iconic franchise about the children of famous monsters and creatures. The series, which will be available globally across Nickelodeon platforms, follows fan-favorite characters Clawdeen Wolf, Draculaura, and Frankie Stein as they navigate the hilarity of high school in the hallowed halls of Monster High.

Transformers (premieres 2022 on Nickelodeon) – Based on Hasbro’s iconic global property, the original animated series co-produced by Nickelodeon and Hasbro’s entertainment studio eOne will follow a new species of Transformers who must find their place and purpose among Autobots, Decepticons, and the human family that adopts them.

Avatar Studios – Nickelodeon Animation Studio’s new division, helmed by original creators and co-chief creative officers Michael DiMartino and Bryan Konietzko, will create original content spanning animated series and movies based on the beloved world of Avatar: The Last Airbender and The Legend of Korra. The Studio’s output will bow on platforms including Paramount+, ViacomCBS’ subscription video on-demand service; on Nickelodeon’s own linear and digital platforms; as well as on third-party platforms and in theaters. The first project, an animated theatrical film, is set to begin production later this year.

Nickelodeon continues to lead in Kids 2-5, with Nick Jr. growing over the last year into the number-two position on all kids’ TV, second only to Nickelodeon. The new season features more of Nickelodeon’s biggest hits, plus brand-new titles based on some of the most popular preschool characters ever.

Baby Shark’s Big Show! (premieres March 26, 2021 on Nickelodeon) – Based on the world-famous pop culture phenomenon, this brand-new series centers on Baby Shark and his best friend William as they journey on fun-filled comedic adventures in their community of Carnivore Cove, make new friends and sing original catchy tunes along the way. Baby Shark’s Big Show! is co-produced by Nickelodeon Animation Studio and SmartStudy, the global entertainment company behind the beloved children’s brand Pinkfong.

PAW Patrol: The Movie (premieres August 20, 2021 in theatres) – A Spin Master Entertainment production in association with Nickelodeon Movies, this major motion picture animated feature film is based on the award-winning preschool series PAW Patrol and will be distributed by Paramount Pictures. The Tiny Chef Show (working title; premieres 2022 on Nickelodeon) – Herbivore social media sensation The Tiny Chef is bringing his culinary adventures to Nickelodeon in a brand-new series, produced in association with Imagine Kids+Family, Tiny Chef Productions, and Nickelodeon Animation Studio, that will follow the talented chef as he whips up tasty ‘weshipees’ and the world’s tiniest plant-based dishes from his tree-stump home.

New series The Hamster Show (working title; premieres 2022 on Nickelodeon) – This series, produced by Nelvana, follows a motley crew of hamsters, the heroic protectors of their 8-year-old owner Harry, who they mistake as their King and beloved ruler of their elaborate colorful-tubed kingdom.