Animation remains key as network reveals plans for expanding franchises such as ‘SpongeBob SquarePants’ and ‘PAW Patrol;’ new series including ‘Face’s Music Party,’ ‘Bossy Bear,’ and ‘HexVet;’ and a ‘Blue’s Clues & You! Live Tour’ starting this fall in the U.S. 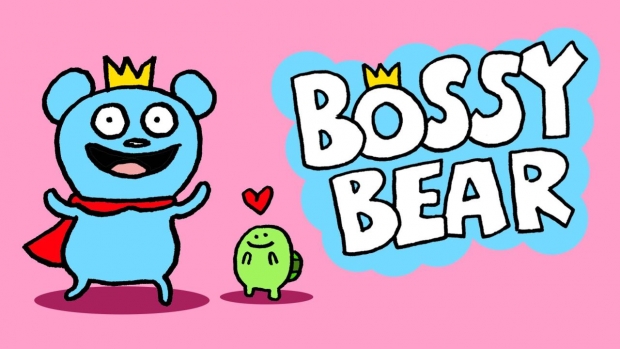 At its annual upfront presentation held live today in New York City, Nickelodeon outlined plans to expand its franchise strategy with a stream of new animation, preschool, and live-action content across streaming, linear, and digital platforms, at the box office and through location-based experiences such as live tours and family festivals. Details of franchise expansion were shared for popular properties including SpongeBob SquarePants, PAW Patrol, Blue’s Clues, Baby Shark, and The Loud House; a number of new titles were introduced as well including Monster High and Transformers. Bossy Bear (Season 1, 30 episodes) – The new animated preschool series, produced in partnership with Imagine Kids+Family, is from David Horvath and Sun-Min Kim (Ugly Dolls), and based on Horvath’s popular book series. The show follows the misadventures of Bossy Bear, an overly enthusiastic extrovert, and Turtle, a thoughtful introvert--unlikely besties who make the perfect team for navigating silly childhood adventures in their Koreatown-inspired city of Pleasantburg.

HexVet (Season 1, 20 episodes) – The magical world of Willows Whisper comes to life in a new animated preschool series based on the BOOM! Studios’ graphic novels by Sam Davies. The CG and 2D-hybrid adventure-comedy series follows unlikely best friends Nan and Clarion as they navigate life's weird and wacky challenges, while apprenticing to be magical veterinarians for fantastical creatures. Big Nate (Season 2, 10 episodes) – Adapted from a children’s book and comic strip, the show follows Nate and his best friends as they navigate sixth grade with humor and style. The Paramount+ original series debuted last month. In Season 2 the hilarious and heart-filled hijinks that define the series will dive deeper into the backstories of Nate’s friends and introduce Nate’s grandparents.

Blaze and the Monster Machines (Season 7, 26 episodes) – An all-new season for preschoolers will include themed storylines including special missions, mighty mechanical rescues with Robot Riders and high-flying adventures with Super Wheels.

Middlemost Post (Season 2, 13 episodes) – The new season will be packed with heart, humor, and friendship with the Middlemost Post doing what they do best: deliver the mail to the unusual inhabits of Mount Middlemost. Along the way, they’ll enter Greenwood’s secret wrestling competition, discover one of Burt’s new talents, befriend a mysterious mountain recluse, and meet Lily’s family for the very first time. SpongeBob SquarePants – Incurable optimist SpongeBob SquarePants, Patrick, Sandy, Mr. Krabs, Plankton and Squidward, along with all the denizens of Bikini Bottom, will plunge into all-new adventures with a 14th season (26 episodes) of the most-watched kids’ animated series for 20 consecutive years. Bikini Bottom continues to expand with more episodes of the first two spin-off series Kamp Koral: SpongeBob’s Under Years and The Patrick Star Show, which was recently picked up for a second season, along with three character-driven movies launching exclusively on Paramount+, and a fourth theatrical release from Nickelodeon Animation currently in development.

PAW Patrol – Building on the franchise’s success, Nickelodeon is renewing the award-winning, top-rated preschool series for a 10th season (26 episodes, produced by Spin Master Entertainment) that will follow the PAW-some pack of pups, including Chase, Marshall, Rubble, Skye, Rocky, Zuma, Everest, and Tracker, on more action-packed rescue missions and adventures. Coinciding with the property’s 10th anniversary in 2023, is the TV series’ first-ever spinoff centering on Rubble and the release of the movie sequel PAW Patrol: The Mighty Movie. Baby Shark – The show continues to grow with a feature-length movie in development for Paramount+ in the U.S., and an upcoming special episode featuring Grammy Award-winning, multiplatinum superstar Cardi B, and her family, Offset and Kulture, who lend their voices to a special episode of Baby Shark’s Big Show! (co-produced by Nickelodeon Animation and The Pinkfong Company). “The Seaweed Sway,” premieres April 15.

The Loud House – Nickelodeon Studios begins production on a new original live-action series (10 episodes) based on the Emmy Award-winning animated show, The Loud House, premiering later this year on Paramount+. This follows the success of the live-action movie, A Loud House Christmas, which premiered on Nickelodeon in November.

Transformers – Based on the iconic Transformers property, the new animated action-comedy series Transformers: EarthSpark is set to premiere globally on Paramount+ in November. Produced in partnership between Nickelodeon Animation and Hasbro’s Entertainment One (eOne), the series introduces a new generation of Transformers robots, the first born on Earth. The robots, who are welcomed and cared for by a human family, redefine what it means to be a family. Following the launch of the series, the franchise will continue to expand next summer with Paramount Pictures’ Transformers: Rise of the Beasts, with Steven Caple Jr. directing, and even further with an untitled, animated Transformer’s film, with Josh Cooley attached to direct, from Paramount Animation and eOne debuting on July 19, 2024. Blue’s Clues & You! – After celebrating the series’ 25th anniversary, Nickelodeon has greenlit a fifth season (26 episodes) that will follow Josh (Josh Dela Cruz) and Blue as they skidoo into brand-new adventures. Upcoming highlights for the property include an original movie Blue’s Big City Adventure for Paramount+ and Nickelodeon, and a live tour Blue’s Clues & You! Live on Stage kicking off this fall in the U.S.

Avatar: Braving the Elements (Season 2, 40 episodes) – The official companion podcast for Avatar: The Last Airbender and The Legend of Korra returns for a second season as hosts Janet Varney (the voice of Korra) and Dante Basco (the voice of Prince Zuko) continue their re-watch of the series. Special guests from cast members to producers to superfans drop in to explore elements of the Avatarverse and reveal secrets behind the making of the show. Avatar: Braving the Elements is produced in partnership with iHeartRadio.

Blue’s Clues & You! Live Tour – Nickelodeon recently announced that Blue will take center stage in a new live stage production by Round Room Live. Launching this fall in the U.S., the interactive live tour will feature Blue, Josh, and their friends Magenta and Rainbow Puppy, among others, in a new original musical adventure. Additional information, including cities, dates and exclusive pre-sale ticketing opportunities will be announced in July.