The new preschool animated series follows Rubble and his construction pup family as they help the community of Builder Cove; series premieres this coming February. 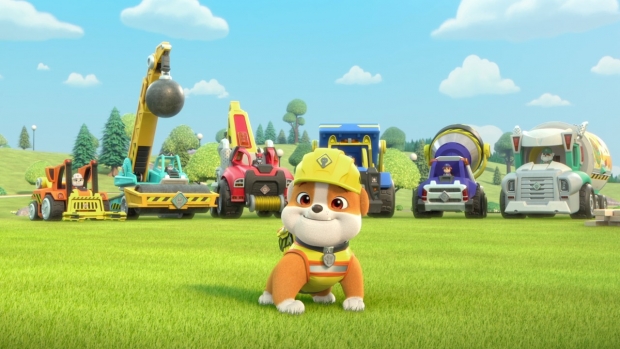 Nickelodeon and Spin Master have just announced Rubble & Crew, a brand-new animated spinoff of the preschool series PAW Patrol, set to debut Friday, February 3rd, at 11:30 a.m. (ET/PT). Produced by Spin Master Entertainment, the series (26 episodes) follows Rubble and his pup family as they use their construction vehicles to build and repair whatever the town of Builder Cove needs in high-stakes adventures. New episodes will air Fridays on Nickelodeon and continue to roll out on Nick Jr. channels internationally next year.

Set in the community of Builder Cove, a neighboring town to PAW Patrol’s Adventure Bay, Rubble & Crew centers on Rubble, the funny and optimistic leader of the construction crew. In the small, quickly growing town, lots of things are still needed for the community to come together, including a bigger airport, train station, bridges, tunnels, schools, fire stations, parks and more. Rubble and his construction pup family--his pup cousins Mix, Wheeler, Charger, Motor, along with Grandpa Gravel and Auntie Crane--must work together to tackle and build all the projects the town needs.

The spinoff series will feature occasional appearances by familiar faces from Adventure Bay and introduce the following new characters: Mix, a construction chemist handling all things concrete, glue, cement and custom paints; Wheeler, the clean machine for this Builder Cove team, who does not like to get dirty and bolts away to clean up every mess; Charger, a big energy pup (especially when he gets a case of the zoomies!) who is kind and always eager to help out or dig into a new construction project; Motor, the tiniest and youngest pup who is a valuable member of the construction crew and looking for ways to be a good helper with her power smash-it energy; Grandpa Gravel, Rubble’s grandpa, the family kibble chef who supplies the team with snacks from his tasty food truck; Auntie Crane, Rubble’s auntie, who runs the supply warehouse and makes sure all the pups are loaded up and ready to build; Speed Meister, who runs the rival construction company in town along with his slow-moving villainous sidekick, Mr. McTurtle--together they build fast and sorta good; Mayor Greatway, Adventure Bay Mayor Goodway’s sister, a motorcycle-riding bubbly bundle of friendliness; and Greatway’s pet, Mr. Ducky-Doo.

Ramsey Naito, President, Paramount Animation and Nickelodeon Animation, said, “Every dog has its day, so we’re answering the fan demand for more of PAW Patrol’s beloved bulldog, Rubble, with his very own series that marks the TV expansion of the global PAW franchise. Rubble & Crew is an all-new series focusing on family and community, and it’s filled with new characters and big adventures that lean into construction play patterns that will let the audience engage in a whole new way.”

“As a proud member of the PAW Patrol, Rubble has stolen the hearts of preschoolers around the world with his loyal, optimistic nature and penchant for treats,” said Jennifer Dodge, Spin Master’s President of Entertainment and Executive Producer. “Our new series expands Rubble’s world with storytelling that digs into amazing construction projects and the importance of family, combined with high-stakes action, fun adventures and messy demolition that preschoolers will love.”

PAW Patrol’s 10th anniversary in 2023 will culminate with the October 13th release of the theatrical movie sequel, PAW Patrol: The Mighty Movie, from Spin Master Entertainment, Paramount Pictures, and Nickelodeon Movies. PAW Patrol was recently renewed for a 10th season (26 episodes) that will follow the pack of pups, including Chase, Marshall, Rubble, Skye, Rocky, Zuma, Everest, and Tracker, on even more rescue missions and adventures.