Studio behind ‘Peppa Pig’ and ‘PJ Masks’ launches their new CG-animated preschool series about the adventures of a little red rescue bike and his loyal Bike Buddies. 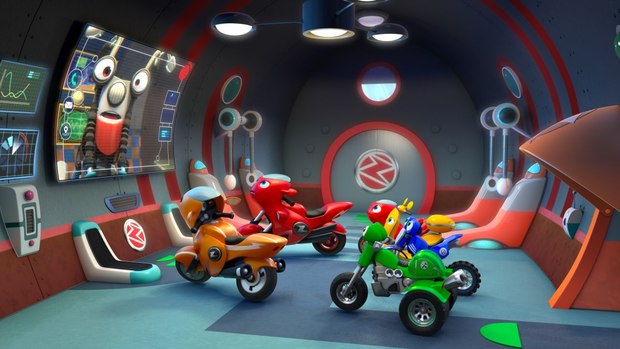 NEW YORK – Parents and children alike will have the opportunity to race off into the wheeling world of Ricky Zoom, the brand-new CG-animated action-adventure series premiering Monday, September 9, on Nickelodeon. Hailing from Entertainment One (eOne), the studio behind global phenomenon Peppa Pig and hit show PJ Masks, the new preschool series follows Ricky, a little red rescue bike, and his loyal Bike Buddies as they zoom around their Wheelford community helping others, trying out new stunts, and learning to stand on their own two wheels. Ricky Zoom, which consists of 26 half-hour episodes, will air weekdays at 12:30 p.m. on Nickelodeon.

In the series premiere, “Flat Out Awesome/Ricky’s Rescue Coaching Badge,” Loop gets a flat tire and Ricky and the Bike Buddies must work together to make sure he doesn’t miss the Steel Awesome stunt show. Then, Ricky is eager to get his rescue badge.

Meet the Bike Buddies along for the ride:

Developed by Emmy Award-winning creator Alexander Bar and Production House Frog Box, Ricky Zoom highlights the importance of friendship, resourcefulness, community and teamwork. Celebrating differences is one of many zoomtastic themes within the series.

The official Ricky Zoom app, Welcome to Wheelford, is available today for free on iOS and Android platforms. Featuring fun mini-games and interactive playgrounds for kids to zoom into adventure and explore the world of Wheelford, the app allows audiences the ability to engage with the Bike Buddies on and off the screen, in addition to active social channels.