Slate of original digital-only series bows today on Nick.com with debut of animated ‘Welcome to the Wayne.’ 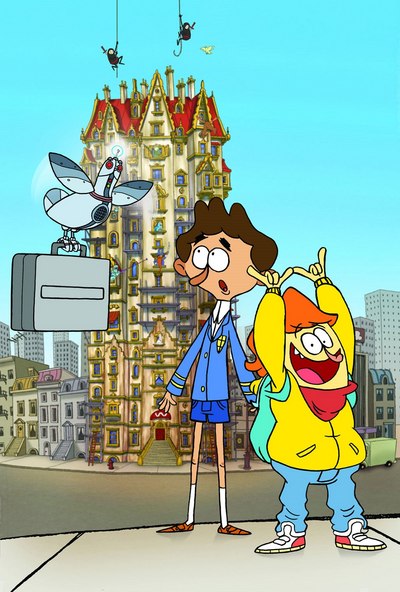 NEW YORK -- Nickelodeon today officially launched its newly redesigned Nick.com web site that takes its creative inspiration from the network’s Emmy Award-winning Nick App, which debuted last year and now has more than 10 million downloads. The new Nick.com leaves behind conventional long pages and vertical scroll in favor of a unique interface: an edge-to-edge landscape design that fills the screen as kids navigate the site horizontally. The new site will also host a slate of new original, short-form, digital-only series produced just for Nick.com and the Nick App, leading with the animated Welcome to the Wayne debuting today.

Putting kids in control of their experience with the site, the new Nick.com lets them easily click or swipe as they wish across the site’s content-heavy offering of games, videos, the famed Do Not Touch button, full-length TV series through TV Everywhere authentication and a slate of its own original animated and live-action series. The new design is initially launching for desktop and laptop computers, but will be fully responsive on tablet and smartphones by fall.

The new site offers a consistent, horizontal approach throughout the games, videos, and show sections, making it easy for kids to know how to use the site. The new design also puts the emphasis on content, with a simplified approach to layout and navigation. In addition, the new site offers an innovative app-like video viewing experience: video is played back using the full real estate of the site, and just like apps, the player controls and navigation fade away, and then reappear with a rollover or tap.

“The new Nick.com is the embodiment of Nickelodeon in the digital space, from its funny and irreverent attitude down to its almost endless content areas filled with unexpected surprises and the most popular shows and characters,” said Matthew Evans, Senior Vice President, Digital, Nickelodeon. “While the new design is unique in the overall market, it’s already a familiar winner with kids because it takes its creative cues directly from the innovation of the Nick App, including meeting kids’ demand for new content with original digital-only series. We’re using every pixel possible to deliver the best experience imaginable to our audience.”

Nick.com’s first digital-only series kicks off today, Monday, Aug. 4, with the debut of Welcome to the Wayne, developed and produced by Nickelodeon expressly for its digital platforms. Comprised of six 4-to-5-minute episodes that will be available each on Nick.com and the Nick App, the series follows the adventures of Olly Timbers and Ansi Molina, two ten-year-old boys exploring the crazy, unpredictable world of their New York City apartment building, The Wayne. Created by Emmy Award-winning writer and composer Billy Lopez (The Wonder Pets, Phineas and Ferb), Welcome to the Wayne is also currently being developed for a TV series for Nickelodeon.

Welcome to the Wayne is the first of four original digital-only series rolling out on Nick.com and the Nick App this year, with more in development. The other titles in Nickelodeon’s original digital series slate include the previously announced live-action Junior Eye, created by Will and Aaron Eisenberg; live-action Chase Champion (working title), created and directed by Michael Chaves and executive produced by Jeremy Slutskin; and the animated Mr. Sheep’s Department of Dreams, created by Alan Foreman.

Nick.com will offer access to more new episodes and series than ever before. To watch full-length episodes of Nick’s hit TV shows on the new web site, including favorites like SpongeBob SquarePants, Teenage Mutant Ninja Turtles, The Haunted Hathaways and The Thundermans, among others, users can authenticate through participating TV providers including AT&T U-verse, Bright House Networks, Cablevision, Cox DIRECTV, RCN, Suddenlink, Time Warner Cable and Verizon FiOS, which collectively reach more than 50 million homes.