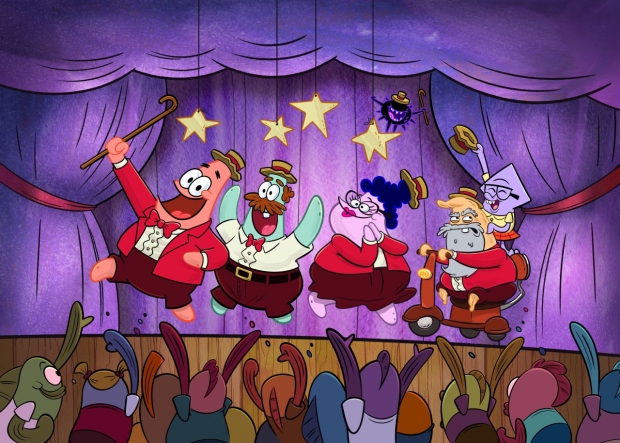 The Patrick Star Show is the second spinoff of the hugely successful SpongeBob SquarePants TV series; the first, Kamp Koral: SpongeBob’s Under Years, premiered earlier this year on Paramount+.

The 2D family sitcom follows a younger Patrick Star living at home with his family, where he hosts his own variety show for the neighborhood from his television-turned-bedroom. His little sister, Squidina, works behind the scenes to make sure Patrick’s show is always running smoothly, while his parents, Bunny and Cecil and his grandpa, GrandPat, each support Patrick in their own hilariously absurd ways. The Star family’s unpredictable adventures often inform, integrate, and sometimes even interfere with Patrick’s TV show, but one thing is for sure: his bizarre life always makes for great television! In the premiere episode, “Late for Breakfast,” Patrick presents a show about food after missing out on a hearty breakfast. Then in “Bummer Jobs,” Patrick and SpongeBob experience the wonders of the workforce.

Check out the new trailer: Marking Nickelodeon’s first original animated series in five years, Middlemost Post hails from SpongeBob SquarePants’ alum John Trabbic III and follows a former rain cloud, a brawny mailman, and their magical pet walrus as they deliver packages to the unusual inhabitants of Mount Middlemost. In the debut episode, “First Delivery,” while delivering a letter to a house that never gets mail, the gang goes through warfare to get to its front door. Next in “Chore or Less,” in an attempt to be more like Angus, Parker does the chores and realizes that they’re actually boring.

The show has all the familiar fingerprints of a Nickelodeon animated series - 2D animation mixed with real photos, live-footage cut-aways, highly detailed close-up illustrations, a recognizable but bizarre take on the real world and, of course, ample physical comedy.

Check out the new trailer:

You can also giggle through a 3-minute short, Unboxing, released last week, and read AWN’s fun interview with Trabbic and co-executive producer Dave Johnson, ‘Middlemost Post’ is all Smiles as Nick’s First Original Series in 5 Years.

The Middlemost Post voice cast includes Becky Robinson (Kipo and the Age of Wonderbeasts) as Parker J. Cloud, an exuberant, relentlessly kind, overly eager, and most of all, pliable cloud who’s desire is to spread cheer; John DiMaggio (Futurama) as Angus Roy Shackelton, Parker’s boss and proprietor of the Middlemost Post; Kiren (Raising Hope) as Lily, Parker’s best friend and master inventor;  Colton Dunn (Superstore) as Mayor Peeve, the petty Mayor of the city of Somewhere locked in a petty, one-sided feud with Angus; and Johnny Pemberton (In the Loop) as Ryan, Mayor Peeve’s loyal assistant.

Since its launch July 17, 1999, SpongeBob SquarePants has reigned as the number-one animated series on TV for the last 18 years, while generating a universe of popular characters, pop culture catchphrases and memes, theatrical releases, consumer products, a Tony Award-winning Broadway musical, and a global fan base.  SpongeBob SquarePants is the most widely distributed property in ViacomCBS Networks International history, seen in more than 170 countries and territories, translated in 30+ languages, and averaging more than 100 million total viewers every month. SpongeBob SquarePants was created by the late Stephen Hillenburg and produced by Nickelodeon in Burbank.