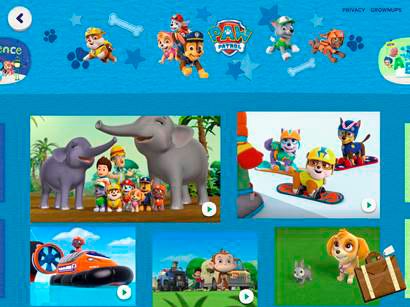 NEW YORK -- Nickelodeon has expanded the lineup for its NOGGIN video subscription service for preschoolers to include the first two seasons of the hit series PAW Patrol and brand-new science and reading hubs featuring original short-form content on the app.

In the past six months, NOGGIN has grown its library by more than 40 percent with the addition of interactive, curriculum-based play-along videos and new library titles including Dora the Explorer and Peppa Pig.

In addition to PAW Patrol, NOGGIN will further expand its library to more than 1,500 full-length, on-demand episodes in the coming months with the introduction of: Max & Ruby and Peter Rabbit; all-new, interactive play-along library episodes from Blaze and the Monster Machines, Bubble Guppies and Team Umizoomi; and new episodes from existing titles Twirlywoos, Miffy and Friends, Trucktown and Go, Diego, Go!

Since its launch in February 2015, NOGGIN has consistently ranked at the top of the charts in the family and kids categories, and it’s one of the top 10 kids apps on the free apps chart on the App Store, in addition to being the No. 1-grossing app for music and video in the family category on Google Play. NOGGIN was also selected by Apple as an Apple TV app of the year.

Currently in its fourth season, PAW Patrol, produced by Spin Master Entertainment, follows a pack of heroic rescue pups -- Chase, Marshall, Rubble, Skye, Rocky, Zuma, Everest and Tracker -- who are led by a tech-savvy boy named Ryder. Together, they work hard to show the people of Adventure Bay that “no job is too big, no pup is too small!” The series features a curriculum that focuses on citizenship, social skills and problem-solving.