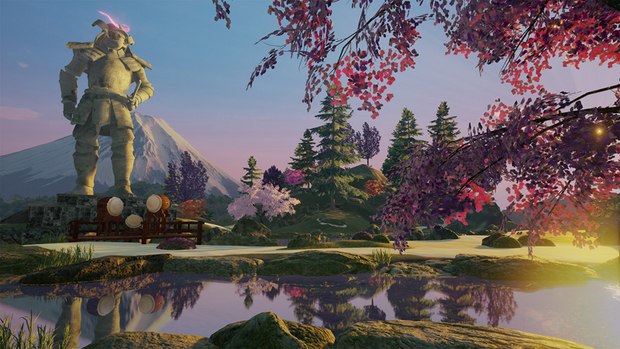 Nice Shoes Creative Studio has entered the exciting world of Virtual Reality, debuting an immersive and interactive meditative experience, Mio Garden, to a delighted audience of marketing leaders at the 2016 ANA Masters of Marketing Conference in Orlando. The piece explores the new storytelling form from a different point of view, aiming to craft a unique experience that would leave a viewer feeling calm and refreshed.

Harry Dorrington served as conceptor and Executive Creative Director for the project, which was led by Nice Shoes newcomer Creative Director Tom Westerlin and Director of VR Technology Brennan McTernan, both of whom have extensive backgrounds in gaming, experiential installations, virtual reality and augmented reality.

Together with Executive Producer Angela Bowen, they evaluated the field of existing VR content and technology to see where Nice Shoes could stand apart in an increasingly populated medium, while providing brands and agencies with a working example of how VR could organically integrate a brand. As the project was in development, the studio shared Mio Garden with collaborators who were interested in learning more about VR. Drawn in by the calming nature of the experience and the garden’s Japanese influences, Sapporo engaged as a sponsor for the project.

“A big buzzword amongst VR evangelists has been ‘presence.’ In many cases, we’ve encountered the effect of the viewer being forcibly placed somewhere else,” said McTernan. “In designing the user experience for the Mio Garden, we wanted to make our viewer feel present through a meditative, beautiful exploration that would leave them feeling revitalized and refreshed.”

After putting on an HTC Vive headset, users are presented with a virtual can of Sapporo, which transports them to another world. Each user begins the experience in the same manner as they start in a dojo, but once they step outside, they have the choice of going to the left or to the right, encountering unique mini games inspired by Japanese culture, with both paths culminating in a drum game to garner favor from a gigantic samurai statue. “We decided to take advantage of the room-scale VR capabilities of the HTC Vive, and build our experience for that device as it would immerse the viewer in a fully interactive environment with user-friendly, intuitive controls,” said Westerlin. “Our artists’ combined experiences in executing beautiful visuals across commercials, films, interactive and gaming came together beautifully as we designed and constructed the Mio Garden in Unreal Engine.”

The beautiful, real-time 3D visuals created by Nice Shoes were complemented by an immersive 360 soundscape created by Sound Lounge and Groove Guild that further draws each user through the garden.

“It was wonderful seeing people as they experienced Mio Garden, as well as to capture their immediate reactions as they emerged,” added Bowen. “It had a lasting emotional effect. They came out feeling peaceful and reenergized, but saddened that they had to leave. To make this impact on such a seasoned crowd was an impressive feat for our team, and we’re looking forward to building on the success of Mio Garden to launch virtual reality collaborations with the agencies and brands we met at ANA.”