Director Dave Meyers of Zanmi Films and Strange Invention's VFX supervisor Todd Sarsfield team with Nice Shoes for a new music video for the signature song in Disney’s ‘Alice Through the Looking Glass.’ 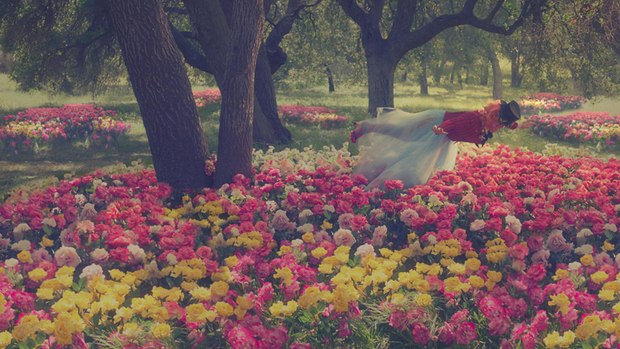 For Pink's song "Just Like Fire", the signature song for Disney's new film Alice Through the Looking Glass, director Dave Meyers of Zanmi Films and Strange Invention's VFX Supervisor Todd Sarsfield teamed with Nice Shoes to bring the singer through the looking glass and on a fantastical journey as Alice. Nice Shoes Creative Studio was instrumental in realizing an impressive, surreal scene in which Pink interacts with eighteen different versions of herself that have taken on the roles of the warring black and white factions of a life-sized chessboard. The studio's Color & Finishing team graded and retouched the entire piece, further aiding Meyers and Pink in reflecting a parallel version of Alice's world through the singer's point of view. A sneak peek premiered exclusively on The Ellen Show on May 4th, and the full piece debuted on May 9th.

The Creative Studio's Director of CG Steve Parish led the VFX team, who first worked to bring together eighteen passes of a continuous seventy second shot as Pink moves across the chessboard in a fully CG generated environment. Meyers and Sarsfield had worked carefully to capture the motion controlled camera move, ensuring that there were no intersections between the characters, but the VFX team had a lot of clean up on the chessboard to create a clean plate before adding reflections and shadows to the floor in order to sell through the separate passes of Pink's game pieces interacting in the scene.

"The goal was to create a single camera move over a minute in length that would continuously reveal new moments, and highlight Pink in her various costumes. As every ‘chess piece’ and ‘Alice’ was to be played by Pink, there would not be time to have more than six to eight costumes changes, the costume and makeup changes alone required over eight hours,” explained Sarsfield. "Ultimately we ended up with over forty pieces of footage to be seamlessly combined, as well as eighteen chess pieces that needed their colors altered, some as dramatically as taking a full black, semi-transparent dress and making it white. Combined with a nearly full synthetic environment, a hybrid of photography and CG, the scene was a significant undertaking."

The Creative Studio team expanded the world beyond the physical board that had been captured on set, building off Meyers' vision of an outdoor garden inspired by formal European gardens and New York's Oheka Castle.

"There were layers of passes - a sky matte painting that needed to be stitched and crafted, a treeline of Tim Burton-inspired trees, and then in front of that huge topiary statues,” commented Parish. "Disney provided textured character models of the Red Queen, Tweedledum and Tweedledee, and the White Rabbit, to which we then applied procedural CG topiary and carefully placed them to work best with the camera move. From a technical standpoint, we used Autodesk's Maya for CG and Solidangle's Arnold as our renderer; the asset system meant we could get our garden renders down to seven minutes a frame. Compositing was done in The Foundry's Nuke and Autodesk Flame."

Look development ran parallel to the entire VFX process, as Nice Shoes colorist Gene Curley collaborated with the director via remote color sessions, with Meyers supervising from Los Angeles. Curley and Meyers crafted a warm look infused with pastels in support of the fantastical world the team was creating.

"Dave had a really distinct vision for the piece. I loved working with him," said Curley. "We both got on the same page very quickly, and worked together to bring out the pastels he had captured on set. I think we created a look that maintains strong ties to the feeling of fantasy established in the film series, while also helping the video to stand out on its own."

One major challenge that arose in the chess scene was the need to change the color of Pink's costumes. There weren't enough of each type on set, and they needed to be adjusted from black to white, red to white, or red to black. Each pass was graded individually by Curley, bringing the costumes to their appropriate colors in Baselight before compositors worked with the elements to bring everything together seamlessly.

"It wasn't just a matter of simply switching from one color to another," remarked color and finishing Executive Producer Tara Holmes. "Careful collaboration and communication between Gene and the VFX team allowed us to pull this off, and make it look as though these had been the colors captured on set. The integration between our color and visual effects teams ensured an efficient collaboration with the director, as well as delivery on a tight three-week schedule."

Creative Studio Executive Producer Angela Bowen added, "It was really exciting to aid in creating this world that was inspired by the film, but not slavish to it. Pink and Dave Meyers had a vision distinct from the film which afforded some creative freedom in delivering our interpretation of this fantastical world. Todd's direction and oversight provided the continuity between live action and VFX that was critical to the project's success."