Reinvention of the National Film Board of Canada’s award-winning documentary has been showcased at IDFA DocLab and the New Frontiers VR Bar at this year’s Sundance Film Festival. 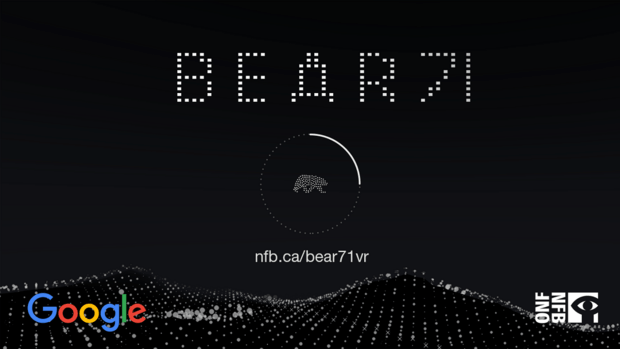 MONTREAL -- The National Film Board of Canada is making groundbreaking, immersive virtual reality experiences more accessible than ever -- starting with a VR reinvention of its multi-award-winning interactive documentary Bear 71, now available free on Chrome as Bear 71 VR.

Originally launched in 2012, Bear 71 is an acclaimed interactive multi-user online experience told from the point of view of an omniscient female grizzly bear -- dubbed “Bear 71” by the park rangers who track her. Created by Jeremy Mendes, Leanne Allison and the NFB, Bear 71 explores how we coexist with wildlife in the age of networks, surveillance, and digital information en masse.

Developed using open-platform WebVR technology for greater accessibility, Bear 71 VR is now available using a Daydream-ready phone such as Pixel or Daydream View, and can also be viewed as a 2D interactive experience. It will soon be available in additional VR headsets as WebVR support expands further in Chrome and other major web browsers.

“This new collaboration with Google is part of the NFB’s strategic goal of forging partnerships with global leaders in creation and innovation to explore new forms of digital storytelling and engage audiences everywhere in immersive experiences that break new ground in form and content,” said Claude Joli-Coeur, Government Film Commissioner and NFB Chairperson.

“WebVR allows developers to build an experience that scales across all VR platforms from Google Cardboard and Daydream to desktop VR headsets, while also supporting 2D displays. We are pleased that WebVR and Chrome helped enable the National Film Board of Canada to bring Bear 71 VR to everyone,” said Megan Lindsay, Google Product Manager for WebVR.

Created in collaboration with Google’s Chrome and VR teams, IDFA DocLab and Sound and Vision, Bear 71 VR has been showcased as a VR installation by the NFB at IDFA DocLab and by Google at the New Frontiers VR Bar at this year’s Sundance Film Festival. It now joins such acclaimed NFB VR works as the Webby Award-winners The Unknown Photographer (Turbulent/NFB), Way to Go (NFB/France Télévisions) and Cardboard Crash (NFB).