Beginning on October 28 and running until November 2, the eighth edition of Get Animated! gives audiences a chance to explore a wide range of animated short films. 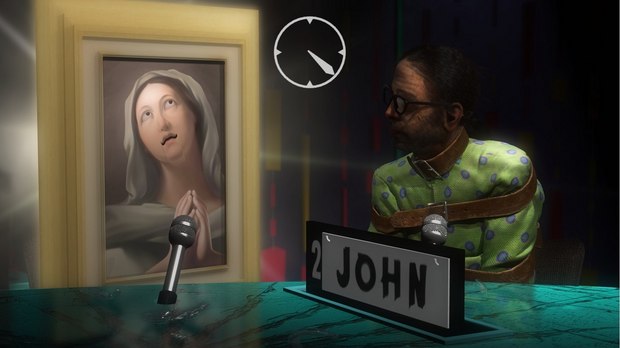 Once again this year, the National Film Board of Canada (NFB) has a wealth of activities planned in celebration of International Animation Day, offering plenty of opportunities to view animated films online and on the big screen.

Beginning on International Animation Day, October 28, and running until November 2, the eighth edition of Get Animated! gives audiences a chance to explore a wide range of animated short films.

Making its online debut on October 29 at NFB.ca, Chris Landreth’s Subconscious Password is a mind-bending romp through a game show of the unconscious—complete with animated celebrity guests—in which “Charles” is paralyzed by his inability to remember a friend’s name. Charles is played by Landreth himself, winner of an Academy Award in 2005 for Ryan and the mentor for the 10th-anniversary edition of Hothouse, the NFB Animation Studio’s program for emerging animators. Subconscious Password received the Cristal Award for Best Short Film at the prestigious Annecy International Animation Film Festival and was named best animated short at the Canadian Screen Awards.

Also available online are six shorts directed by the apprentice filmmakers in Hothouse 9, for which Munro Ferguson was the mentoring director. Hothouse 9 plunges into the almost impossible realm of abstract storytelling: films imbued with wonder about the mysterious forces at work within and around us, and which range in technique from 2D animation, to 3D CGI, stop-motion, and more. This online program curated especially for International Animation Day is complemented by a selection of works by past winners of NFB French Program’s Cinéaste recherché(e) competition for emerging filmmakers.

On Tuesday, October 28, at 7 p.m. in Montreal, Cinéma Excentris will also present Animez-Vous 2014, a one-night-only program of recent NFB shorts (all films screened in French).