Just in time for National Poetry Month, the National Film Board of Canada and ARTE unveil their series of 12 short interactive stories at interactivehaiku.com. 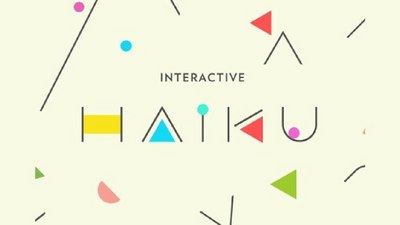 MONTREAL -- Celebrating National Poetry Month Interactive Haiku Month, the National Film Board of Canada and ARTE have unveiled their series of 12 short interactive stories at interactivehaiku.com.

Designed to surprise and move viewers, and to encourage reflection, Interactive Haiku will be released throughout the month of April, with four stories launching today. The project will also be featured at this year’s Tribeca Film Festival, as part of Tribeca Film Institute Interactive’s “Interactive Playground.”

In an era in which everything moves faster and faster, the NFB and ARTE asked creators to produce a different kind of short interactive work by drawing inspiration from the haiku form to create digital equivalents of haiku. The 12 winning proposals come from six different countries and were selected out of 162 submissions from 20 countries. The projects are accessible online or via tablets.

These projects provide an opportunity to explore a different side of a web culture saturated with memes, Vines, and other experiences designed to be consumed quickly.

“The NFB and ARTE sought interactive haiku built literally from images and sounds. Nothing like a challenge to release pent-up creativity,” said competition jury chair William Uricchio. “As the works demonstrate, insight is the real source of haiku power. Interactivity allows for a way to translate the classic technique of cutting or juxtaposing ideas, allowing us to explore the hidden life of images, sounds, and the moments that define us.”

The third original project to come out of a framework agreement between the NFB and ARTE, Interactive Haiku emerged from a global call for proposals to digital creators, challenging them to push the boundaries of interactive narration with very, very, brief experiences. The two institutions previously produced Bar Code and In Limbo, and have collaborated on Sound Ecology, Fort McMoney, and The Devil’s Toy Redux.

Check out the 12 winning proposals, below:

Speech Success, Spain
Roc Albalat, Pau Artigas, Jorge Caballero, Marcel Pié
The crowd is huge, tightly packed, and merciless. All eyes are on you. Will you be cheered... or will you flame out?

Life Is Short, France
Florian Veltman, Baptiste Portefaix
From first to last words, everything goes by too fast. Relive the key moments of your life in a few seconds.

Music in the Key of Life, Sweden
Theodor Twetman, Viktor Lanneld
Everyday objects possess an innate melody. Scan the barcodes of the objects around you and let the music play!

Z..., France
Cyril Diagne / Lab212, Béatrice Lartigue / Lab212, Chapelier Fou
Pull the zipper and let it take you on a voyage inside yourself... and your screen.

Facing the Nameless, New York, USA
Ziv Schneider of Specular Projects
In the era of the cult of the virtual celebrity, it is impossible to die unidentified. Free the dead from their anonymity.

Famograph, France
Pierre Jullian de la Fuente
The Internet absorbs and spits out your personal information. Take this test and find out what your friends really think of you.

Grand bruit, Montreal, Canada
Étienne Desprès, Marc Larivière, Martin Rodriguez, Simon Emmanuel Roux
In the village of Grand Bruit, each undulation of your voice leaves an imprint. What traces do you want to leave behind?

Yogacara, Japan
Yuichi Minamiguchi, Ayumi Yoshioka, Jun Nakawatari, Masahiko Otake
Stop moving, relax, and take some time to contemplate what appears on your screen. It is only then that you will be able to live your haiku.

Phi, France
Charles Ayat, Mathias Desloges, Colleen, Marie Blondiaux / Red Corner
We are so awash in images that we forget how magical they can be. Pick up the thread and explore their real nature.