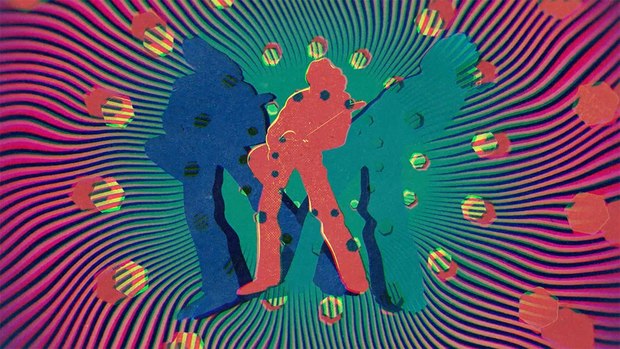 Taking viewers on a psychedelic tour through a pivotal time in music, the film is shaped around Jimmy’s own words on his relationship with the iconic guitar. Immersing themselves in the heady days of the late 60’s, Smith & Foulkes creatively expanded around Jimmy’s narrative to focus on what happened when these two creative energies collided.

A team of animators at the London and Los Angeles-based Nexus Studios worked to visually convey the atmosphere and energy of the time and illustrate key moments in the development of the legendary rock band. The film shows how Jimmy’s personalization of the Telecaster -- into the famed Dragon and Mirror versions -- takes Led Zeppelin to previously uncharted sonic horizons.

“It goes without saying that everybody loves a dragon,” Smith and Foulkes commented. “And we made full use out of that! But it was much trickier to visually illustrate the mirror guitar which was more about the optical sensation of prismatic light patterns. So we hit upon this idea of how images are bent and twisted in a Hall of Mirrors, which seemed to fit the idea of new sounds being distorted as Jimmy experimented with the Telecaster.”

Foulkes & Smith have developed a reputation as one of London’s top directing teams, winning the Cannes Grand Prix in 2005 and receiving a 2009 Oscar nomination for their short film This Way Up. Their numerous awards include several Cannes Gold Lions, two D&AD Black Pencils, a couple of Grandy at the ANDYS, several BTAA Golds and a whole host of others. Honda “Grrr” is the most awarded commercial in the world from 1999-2008 and was AdWeek’s Ad of the Decade. The duo were behind BAFTA-nominated The Fearless are Here, a bold and exhilarating animated film which heralded the arrival of the 2018 BBC Winter Olympics coverage. Most recently, they created Take on History, a journey through the evolution of animation and the Wimbledon Tennis Championships as part of a campaign that celebrates 100 years of the AELTC.