Sam Southward wins a Gold Young Director’s Award at Cannes YDA for his latest short, which was created using a mix of hand-made miniature sets and CG animation. 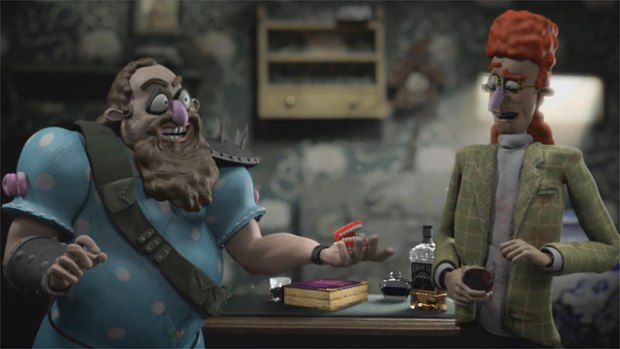 After the End, directed and co-written by director Sam Southward and produced at London-based independent production company and animation studio Nexus, has added a Gold Young Director’s Award at Cannes to its long list of awards. The film, created at the NFTS, saw its full online release on July 12th.

After The End is a hilarious animated short about a post-apocalyptic world featuring two extraordinary characters, mind warping drugs and full frontal male nudity. It explores the possibility that the only thing worse than being the last man on earth, is being the second to last man on earth.

Rene Fustercluck was not a happy person; just when he thought things couldn’t get any worse, the apocalypse happened. As the lone survivor, he took it upon himself to write a book documenting the entire history of the world. Just as he is finishing the book, Gordon arrives on a boat wearing a dress and carrying a blow up doll.

“I had always wanted to do something post-apocalyptic as I love the visuals you can create in a destroyed world, but also feel it can be used as an interesting lens to talk about our own time,” Southward comments. “Keeping an amount of ambiguity, I decided that the apocalypse in my film would be caused by man himself.  The film's story then becomes a microcosm of the destruction of mankind ironically repeating itself again, with no lessons learned.”

To create the film, Southward and the Nexus team created miniature sets, which were then lit and shot as back plates. The characters were created in CG and composited over the top of the plates. Animators from all around the world were working on the project and sending their work to Sam 24 hours a day.

“It was absolutely exhausting but everyone was so talented and worked so hard it allowed us to complete such a large amount of work,” Southward says. “I am equally as proud of how well the team worked together as I am of the finished film.”

“Sam is a fantastic new comic voice,” Nexus co-founder and EDC Chris O’Reilly adds. “This film speaks of his ability to craft a narrative that is incredibly well structured, to exploit multiple filmmaking techniques to create a successful new aesthetic and all along retain his unique comic tone. We’re incredibly excited he’s joined the roster of talent here at Nexus.”