Award-winning director Johnny Kelly delivers animated short about the endearing relationship between a young girl and a monster that highlights the company’s alternative, regenerative approach to society’s insatiable desire for the ‘new.’ 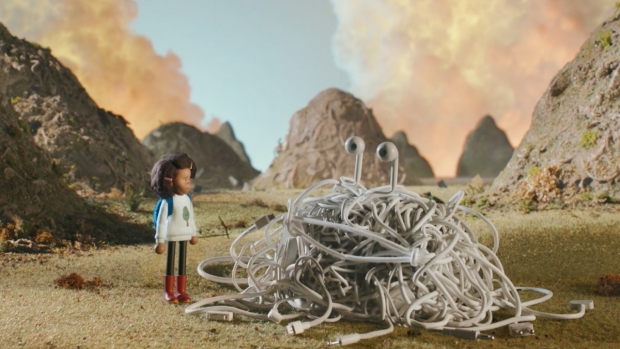 Global marketplace Back Market tapped Nexus Studios director and Cannes Grand Prix winner, Johnny Kelly, to create the centerpiece film, The Monster, for its new “Tech Reborn” campaign. The puppetry film highlights the impact of society’s insatiable desire for the “new” while offering an alternative, regenerative approach—the spot features an endearing relationship between a young girl and a monster.

To create The Monster, Kelly turned to puppetry with a sprinkling of stop-motion and 2D compositing. The production featured over 20 hand-crafted puppets, three of which were different versions of the Monster himself - created with discarded charging cables – as well as the young girl, four city slickers, four miners, four zoned-out tech fans, and crying clouds. Kelly relied on the script's humor and charm and the puppeteers' expertise to inhabit the characters and bring personality to their performances.

Using photogrammetry, Nexus Studios’ animation team captured the sets, puppets, and props for previs, helping to develop a dynamic turnaround for compositing. It also allowed the team to visualize in a 3D space how the 2D animation would track on the puppet’s face. Finally, for the scene where the phone is made new again, the team used stop-motion and choreographed lighting to craft a stylized representation of the Back Market phone regeneration process.

Master model maker Andy Gent and his team were behind the creation of Monster and his fellow puppets. Set fabrication was from Asylum and Arch Model Studio. The Monster is launching regionally in New York for the U.S. holidays. It will appear on Premium Video Placements and Premium Social, with broadcast moments including the Thanksgiving Day Parade and Christmas in Rockefeller Center.

“Somehow, I get to play with puppets for a living, and this particular puppet was especially fun to play with,” shared Kelly. “Assembled from the kind of cables you find in every drawer, in every home around the globe — Monster is a sort of big-tech ‘Mr. Messy.’ Behind the juggling phones and belching phablets, however, is a slightly less silly message about our obsession with the new, and the havoc our over-consumption is wreaking on the world.”

“The story of The Monster asks us to reflect on our own buying habits and challenges the belief that you have to sacrifice something when buying products that have a lower impact on your wallet and the environment,” added Woody Wright, Head of US Marketing, Back Market. “Back Market believes we should do more with what we already have, an idea shared through the tale of a monster who sees that ‘new’ isn't always better. We feel privileged to have worked alongside visionaries like Nexus, Johnny Kelly, Andy Gent, and their talented teams. Johnny’s clear and delightful vision of The Monster helped elevate the script and overall message, and we couldn’t be more proud with how the campaign was brought to life.”