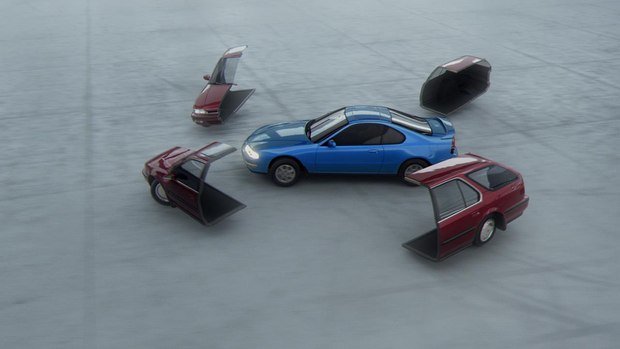 Nexus directors Smith & Foulkes have re-teamed with Honda to create an immersive “through-the-ages” ad campaign to launch the all-new Honda HR-V Crossover. The campaign comprises of two commercial films, “Give and Take” and “Great Thinking Inside,” to take viewers on a journey of discovery through not only Honda but design; a small change can make a huge difference.

“Give and Take” takes a light-hearted approach to depict a literal molding of people’s faces, stretching and pulling ears, chins and foreheads to express the truth that it’s difficult to get everything just the way you want it. The HR-V Crossover has found that no-compromise sweet spot where everything is perfect.

“Great Thinking Inside” appeals to Honda enthusiasts’ sense of nostalgia. With the Honda Prelude, del Sol, Element and others set in Russian-nested-doll fashion, the advertisement shows how one good idea leads to another, and how Honda’s continuous building on past successes have arrived at its latest iconic car, the HR-V Crossover. Sammy Davis Jr.’s “Gonna Build a Mountain” provides a classic, memorable soundtrack.

Simple, eye-catching print work conveys the idea that big isn’t the only way to versatility. Print insertions will be seen in Road & Track, Autoweek, MotorTrend and more and will be in the form of magazine fold-ins. Unfolded, the car stretches out to show a bigger vehicle. Folded in, the ad depicts the HR-V Crossover and all the cargo items it can transport.

The campaign will incorporate a wide mix of media, kicking off with home-page takeovers on Yahoo! and YouTube, along with a presence in network primetime, cable and a variety of sports. Digital support will be featured across various partners, helping to bring to life unique interactive experiences. Notable digital efforts include: sponsoring the brand new Amazon 3D printing store that features a sweepstakes to give users a chance to win an actual 3D printer, collaborating with Thrillist on a Culinary Road Trip event, sponsoring the National Geographic Wanderlust Instagram contest with a chance to win a Nat Geo Yosemite Expedition and custom videos and a personalized interactive post on Buzzfeed.