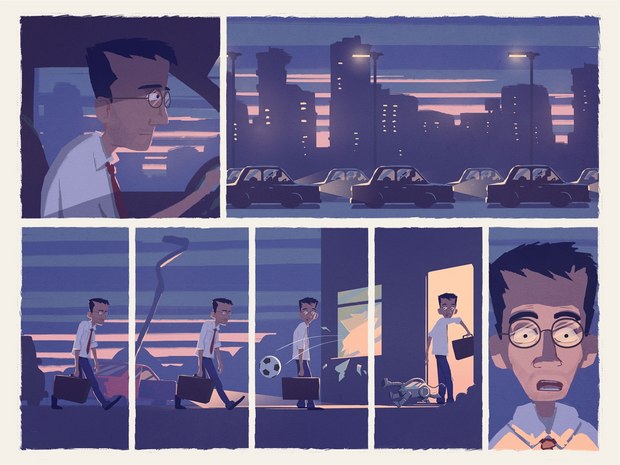 Crafted by an Oscar-nominated animation team, Radio Jones and His Robot Dad is an enchanting storybook app packed full of fun and surprising interactive experiences. The story, which recently featured in the U.K. App Store, has been designed to appeal to children and adults alike, and is available to download free worldwide to iPads. The app is just the first in a series of planned releases for stories featuring Radio Jones across media platforms.

Created by directing team Smith & Foulkes and long time collaborator Executive Creative Director Chris O’Reilly, the app tells the story of a young boy called Radio whose Dad is too busy to spend time with him. So, using all his skills as an inventive maker and coder, he builds himself a Robot Dad and together they set off on a wild adventure.

The app has a graphic novel format that includes fun animations and mini-games designed to take the reader on an exciting adventure, as Radio and his Robot Dad take aim at each other with super-soakers, swing across rivers, climb and shout in an echoing canyon, race trolleys and eventually team up with a whole variety of domestic appliances brought magically to life by Robot Dad. Set to a playfully inventive score by Alex Baranowski, Radio experiences both the exhilaration and the pitfalls of his new found independence.

“We are used to telling stories in a linear way where the viewer sits back and watches the film unfold before them,” said co-writer and director Alan Smith. “But telling the story as an app was a very different and challenging discipline, and one that greatly appealed to us. We wanted the animated sequences to act as opportunities for the reader to share in Radio’s adventures if they choose to. But sometimes you want to be gripped by events without the distraction of interactivity and just want to turn the page to find out what happens next.”

“We’ve always been huge fans of graphic novels, particularly ones that require little or no dialogue and where the visual atmosphere is critical to the story,” added Adam Foulkes, the other half of the writing and director team. “So we wondered if we could tell our story in this way, bringing certain moments to life which would allow the reader to feel more involved with the events.”

Radio Jones and His Robot Dad was produced by Nexus with the support of the MEDIA Programme of the European Union.