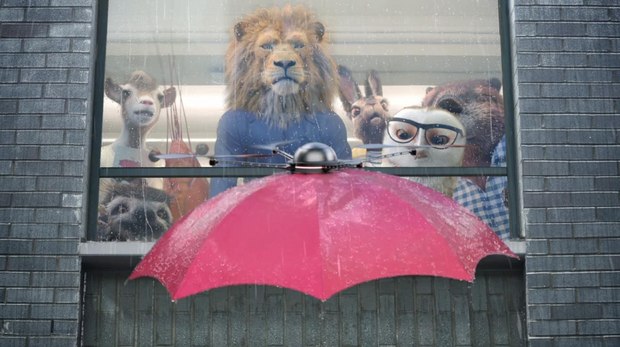 LONDON -- Nexus directors Smith & Foulkes have announced the release of “Animals”, a 60 second commercial for Slack, a leading US business messaging interface. Smith & Foulkes collaborated with TBWA \ CHIAT \ DAY and the client to write the script, inspired by Slack’s tag line “Unimaginable Teams.”

They were able to develop the client’s vision by working closely with them on the project over a period of six months. The story follows the creative process of a team of CGI animals as they collaborate to produce a sensational new flying umbrella.

Shot on location in an East London office, Smith & Foulkes used human stand-ins of similar size and proportions to each animal to map their movements and mannerisms. The intention was to capture as many different realistic human office interactions as possible which could then be transposed into the animal kingdom.

The realistic visual aesthetic of each animal character required a particular emphasis on cloth simulation as well as hair, fur and feathers.  Smith & Foulkes used Hairfarm software to generate realistic textures for each animal.  These CGI creations were then given distinctive human characteristics which defined their roles within the office. But they also bring some of their natural animal behavior into these scenarios, such as the regal lion boss, the wise design guru owl or the multi-tasking finance director prawn.

Smith & Foulkes commented, “Our intention for ‘Animals’ was to create something serious but surreal. We treated it almost as a documentary, allowing the oddness of the animal cast to deliver the innate humor. We wanted to make sure that each of the character profiles were as human as possible so that an audience could recognize each role within a collaborative team. It was refreshing and liberating to work with the Slack client on such an original and exciting project.”