Hot on the heels of the success of the recent viral hit Honda “Hands,” Honda and Wieden+Kennedy London once again team up with Nexus directors Smith and Foulkes to create a captivating film introducing the newest member of the Civic family. 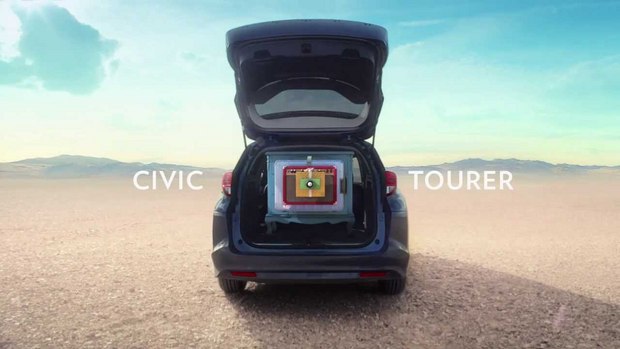 Hot on the heels of the success of the recent viral hit Honda “Hands,” which has been viewed over 10 million times since launch, Honda and Wieden+Kennedy London have once again teamed up with Nexus directors Smith and Foulkes to create a captivating film introducing the newest member of the Civic family, the Civic Tourer.

The “Inner Beauty” campaign celebrates the idea that beauty is about more than what’s on the surface. Whilst appearance is important, what’s on the inside is often forgotten. This trend is apparent not only in design and engineering, but also in wider society – where looks are all-too-often valued over personality. The new Civic Tourer is a perfect example of this. It’s a great looking car, but take a closer look and you’ll see so much more, including class-leading 624L boot space.

As with some previous Honda commercials, the creative idea was in part inspired by interviewing the Honda engineers involved in the project. Adrian Killham, Honda’s Chief Engineer for the Tourer, spoke about wanting people to look past the outer beauty to what lies beneath.

The ad translates this concept by taking viewers on a journey through a series of objects, revealing the beauty inside each: from a golf ball and a toy robot, to a guitar amp and finally, of course, the Civic Tourer. As with “Hands,” there are plenty of clever details for viewers to discover along the way.

The film employs a collage of techniques to achieve a hyper-real aesthetic, mixing stop motion “slicing” and CG effects to create the inside of the objects, and live action for the exterior of the objects. The driving sequences were shot on location in the vast desert landscape of Teruel, Spain.

As well as the bright visual style, sound design played a big role in adding humanity and warmth to the film, bringing life and personality to inanimate objects.

Scott Dungate, Creative Director at Wieden+Kennedy London, says, ‘‘Beauty is more than just the outside. Beauty also lies inside, in how something fits together and works. We wanted to create a film that yes, showed the external beauty of the car, but also celebrated the wonder and surprise of what lies on the inside of things.’’

Directors Smith and Foulkes say, “As always with Honda, Weiden+Kennedy came up with an idea that was a little off the wall. The script was an intriguing puzzle through which we had to navigate a clear path, creating a journey that switches between expansive exteriors and unexpected interiors that eventually relate directly to the practical capabilities of the car. We imagined our journey as a series of tunnels in a desert, capturing the disorientating sensation of driving into an enclosed space before suddenly being thrown back out onto the open road. We began the process by sawing a lot of objects in half, getting to know how you might travel through them and discovering otherwordly interior spaces within. Then we re-imagined the surreal expanse of prog rock artwork as our stage.”

Fans of “Hands” won’t have to wait long to see what Honda have in store next, with the TV premiere of the 60-second spot taking place on Monday, February 3rd. This spot will then subsequently be supported by 60- and 30-second spots on TV and Video On Demand, as well as print and digital media.