Studio and director Conor Finnegan teamed up with BBDO NYC to create Macy’s new holiday campaign starring a little blue reindeer who discovers she can fly; the 60-second stop-motion commercial will air across television and online video during the Macy’s Thanksgiving Day Parade. 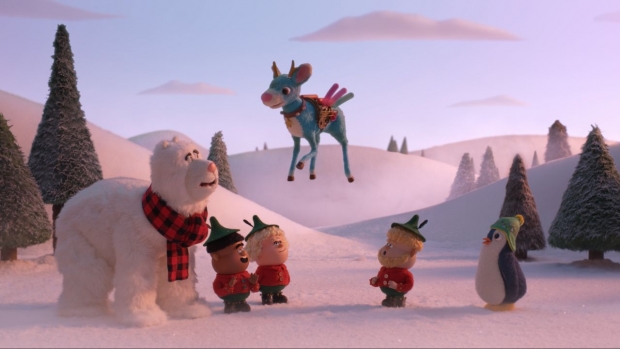 Nexus Studios recently teamed up with Macy’s and BBDO NYC to welcome the holiday season with a charming stop-motion animated commercial. Directed by Conor Finnegan, Tiptoe & The Flying Machine tells the tale of a young blue reindeer who is too nervous to fly but ultimately faces up to her fears with help from her fellow puppet pals.

Conor teamed up with world-class puppet makers and stop-motion mavens to capture a festive spirit of community, magic, and love. The team set out to achieve as much as possible in-camera, shooting for 15 days and handcrafting 11 adorable characters including the main man himself, Santa.

Macy’s holiday campaign stars the bright-eyed and lovable blue reindeer on the verge of realizing her ultimate dream, to join Santa’s Sleigh Team and deliver magic around the world on Christmas Eve. The new film allows viewers to see the magic of the season through childlike eyes and understand what it means to believe in yourself. Tiptoe’s story will come to life through a fully integrated campaign including holiday windows, TV, social, and custom Tiptoe plushies for gifting to Make-A-Wish kids and local charities.

“Macy’s shines during the holidays, bringing friends and family of all generations together, to enjoy memorable iconic events and spread joy through finding the perfect gift online or in-store,” shared Macy’s Chief Customer Officer shared Rich Lennox. “With Tiptoe & The Flying Machine, we’ve created one of our most powerful campaigns to date, bringing to life the magic and wonder of the season, while further positioning Macy’s as the ultimate gift destination and Believe as our emotional epicenter for the holidays.”

Produced by BBDO New York, the 30-second spot will air across television and online video. A 60-second film will air during the Macy’s Thanksgiving Day Parade, along with robust supportive content, including interactive digital features across Facebook, Instagram, and Snapchat. An extended 90-second version will also appear in cinemas.

To officially kick-off the magic of the holiday season, Tiptoe will march down Manhattan on Thanksgiving morning as a puppeted animated balloon; her co-stars Penguin and Polar Bear will be on the accompanying North Pole Believe float. She will sit on top of the iconic Herald Square store marquee in New York and her story will be featured in holiday windows at Macy’s flagships including State Street in Chicago and Union Square in San Francisco. Tiptoe will also be featured at Macy’s Santaland. To spread even more joy this holiday season, 1,000 Tiptoe custom plushies will be gifted to Make-A-Wish kids and local charities.