Created by BAFTA-winning animator, director and leading zoetrope artist Jim Le Fevre, the eight-foot tall and six-foot wide stroboscope spins at 33.3rpm and is illuminated by a strobe-rig to create the optical illusion of animation. 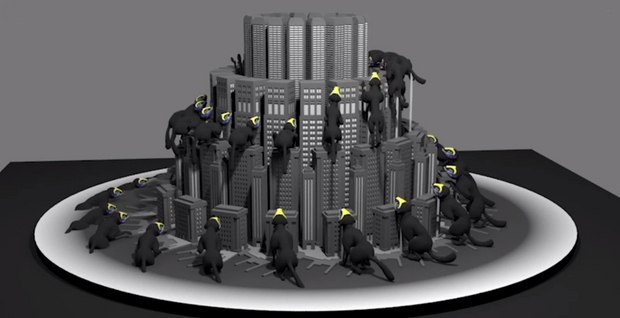 London-based independent production company and animation studio based Nexus announced that director Jim Le Fevre has been commissioned by producer/multi-instrumentalist SBTRKT and record label Young Turks, in collaboration with Red Bull, to create a giant 3D stroboscope. It will be unveiled at Inner-City Arts’ event Summer on Seventh in Los Angeles on 25th July 2015 and housed at Guerrilla Galleries in Downtown LA’s arts district starting July 28th. The SBTRKT-O-SCOPE is one of only a small handful of three-dimensional stroboscopes of its scale in existence, the others owned by animation giants, Pixar and Studio Ghibli.

Created by BAFTA winning animator/director and leading zoetrope artist Jim Le Fevre, the eight-foot tall and six-foot wide stroboscope spins at 33.3rpm and is illuminated by a strobe-rig to create the optical illusion of animation. The architecture and tiers were laser-cut to specific dimensions, and the character animated at Nexus’ London studio then 3D printed frame by frame into physical models.

Extending the visual identity of SBTRKT, the installation was created as a physical prequel to the New Dorp video, and represents the birth of SBTRKT’s now trademark creature. The installation brings to life SBTRKT’s mysterious creature in multiple forms emerging from the water, clambering over the Manhattan skyline, and plunging into New York’s city center.

“The project was ambitious not only in size, but in that we created a longer movement, showing the SBTRKT character appear, move and disappear, in a smooth series of consecutive loops,” says Le Fevre. “The intricate mathematics need to be absolutely precise, across all elements, for this technique to work; from 3-D printing and hand-painting 40 characters, to the code behind the bespoke system for the lighting which involves 20 banks of strobe LEDs run by a magnet sensor that continually assesses the revolutions per minute and adjusts the strobe accordingly, and every single element in between. Only when you have everything in place, and fire up the strobes and motor do you know whether it will work! It’s been great working with Red Bull, without whom the project wouldn’t have been possible.”

“My music has always been about blending live instrumentation within digital worlds,” SBTRKT explains. “Wonder Where We Land was very much born in this way rather than a mathematical programmed record. From the very beginning of SBTRKT and the visual concepts and collaborations with A HIDDEN PLACE that accompany each album, we have always tried to create translations of digital ideas into physical. Whether that was the lenticular cover for Hold On or a self-animating sleeve (Transitions). The album imagery and creature that AHP created was only possible through digital production but I like that the imagery can live beyond a computer screen without it being just a hologram, back to being mechanical and analogue. The models come to life in front of you which makes it quite hypnotic!” “There could not be a more perfect setting to showcase the SBTRKT-O-SCOPE than Inner-City Arts, where our entire focus is on unlocking creativity and innovation,” says Inner-City Arts president & CEO Bob Smiland. “Summer on Seventh is a celebration of creativity and culture taking place at Inner-City Arts’ campus in Downtown LA, which includes various live musical performances alongside interactive art installations, as well as local food trucks and treats.

Le Fevre is a BAFTA and British Animation Award-winning filmmaker whose background is steeped in a variety of media and techniques. He has directed numerous commercials and IDs for well-known brands including Nickleodeon, Ambipur and Rowntrees as well as animated comedy sketches for cult TV series Monkey Dust. With his eclectic mix of techniques and styles, Le Fevre continues to produce fresh and innovative work. He discovered the Phonotropic technique, a contemporary reworking of the Zoetrope as well as pioneering a unique digital/analogue interactive experience, Stages, which combines physically built sets, analogue driven motors and a digital projection, an iteration of which is currently at the Science Museum in London. On-screen his animation techniques encompass puppets, CGI, live action and traditional drawn films mostly geared towards comedy narrative. Mixing live-action and animation Jim created a series of rich and colourful IDs for Sky TV Italy featuring film legend Dustin Hoffman and 3D aliens.