Next PreVIEW Set: A Talk with the ‘Lightyear’ Creative Team

Join the virtual conversation with director Angus MacLane, producer Galyn Susman, and other key talent on Pixar’s new animated feature, the next chapter in the ‘Toy Story’ franchise; the free online panel is on June 28 – register now. 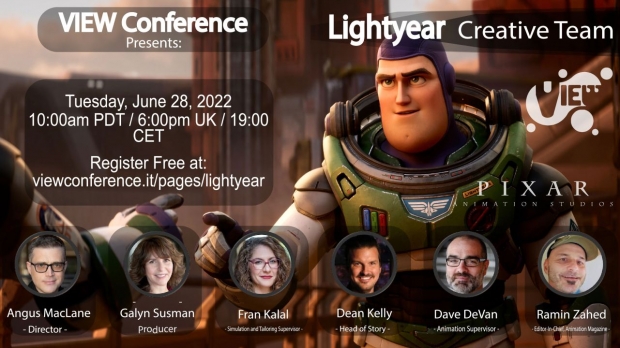 VIEW Conference and Pixar Animation Studios are presenting a free virtual panel with the creative team behind Lightyear, the brand-new animated feature from Disney and Pixar. This online session is a special PreVIEW event ahead of VIEW Conference 2022, happening in Torino, Italy, October 16-20.

Lightyear follows the spectacular adventures of Buzz Lightyear (Chris Evans), the heroic Space Ranger later immortalized as the action toy seen in Pixar’s groundbreaking Toy Story movies. Marooned on a distant planet, Buzz, and his companions – including a cybernetic cat called Sox (Peter Sohn) – attempt to return to Earth, only to be challenged by Emperor Zurg (James Brolin) and his lethal robot army. Lightyear releases in theaters on June 17.

The session is moderated by Ramin Zahed, editor-in-chief of Animation Magazine.

“We are over the moon to join forces with our friends at Pixar for this special PreVIEW panel,” commented conference director Dr. Maria Elena Gutierrez. “Meeting Angus MacLane and his creative team is a wonderful way to celebrate the launch of this much-anticipated film – and also to whet the appetite for our main conference program in October. I am sure everyone around the world will be eager to join us as we travel ‘to infinity and beyond!’”