Next PreView Set: A Conversation with the Filmmakers Behind ‘Namoo’

Join a virtual live screening, presentation, and conversation with the creative team behind Erick Oh's Annie Award-nominated animated short film; the free February 11 event is offered in partnership with Baobab Studios and OGR. 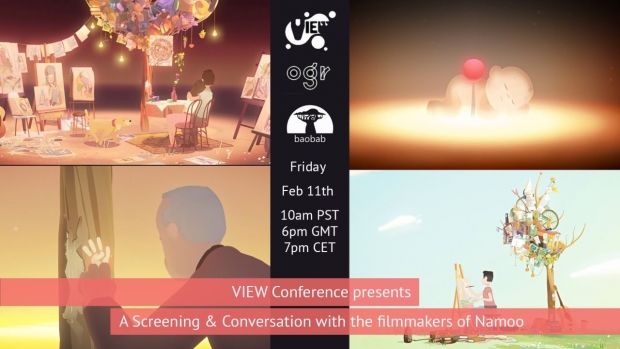 The VIEW Conference is back again with its popular PreVIEW program. Next up, VIEW presents a virtual live screening, presentation, and conversation with the filmmakers behind the acclaimed Annie Award-nominated animated short film, Namoo, on Friday, February 11 at 10am PST / 6pm GMT / 7pm CET.

The speakers will include:

The session will be moderated by Oscar-winning director Peter Ramsey.

The free event is offered in partnership with Baobab Studios and OGR.

Produced by nine-time Emmy Award-winning Baobab Studios, executive produced by John Cho and produced by Larry Cutler, Darnell, Fan and Kane Lee, Namoo recently received the Best Animated Short prize from the 2022 Gold List Awards. It is also on the Oscar shortlist for animated shorts, and is now streaming on HBO Max.

Namoo is a narrative poem come to life through hand-crafted animation. Inspired by the passing of the director's grandfather, Namoo — which translates to “tree” in Korean — follows both the beautiful and heartbreaking moments of a man’s life, from beginning to end. It was written and directed by Oscar-nominated filmmaker Erick Oh (Opera) and marks his most personal and ambitious work to date.

“Erick Oh is a visionary artist and filmmaker,” shared VIEW Conference director Dr. Maria Elena Gutierrez, “…and NAMOO is his most moving work yet. As soon as I heard that Erick would be working with the incredible creative team at Baobab Studios, I knew the results would be spectacular.”

Before the show, flip through the virtual “Art of Namoo” book and watch the full Namoo short online.