Next PreVIEW Set: ‘CG Tornados, Jet Engines and Cows - the VFX of Twister’

Join a free conversation with a panel of the famed VFX practitioners and filmmakers behind Jan De Bont’s 1996 disaster thriller and Oscar nominee for Best Visual Effects; April 8 event will include an audience Q&A. 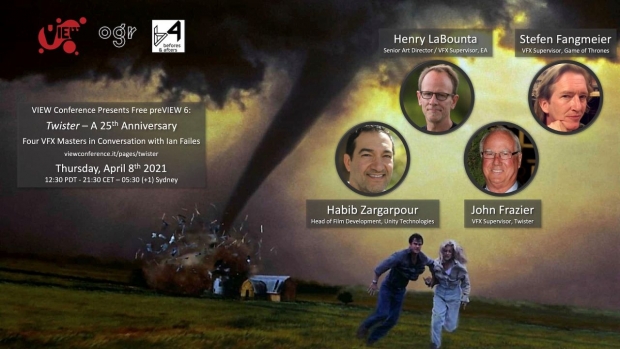 The View Conference continues its popular PreVIEW program, delivering inspiring events every month in 2021 leading up to the official October 17 launch of the conference. Next up - “CG tornados, jet engines and cows—the VFX of Twister.” Join the panel of accomplished VFX practitioners and filmmakers to re-visit the visual effects of Twister, which celebrates its 25th anniversary this year. The free event takes place on April 8 at 9.30pm CET.

In 1996, Jan De Bont’s Twister showcased an incredible collaboration between practical and digital visual effects to place its characters directly in the path of terrifying tornadoes. Starting with an early test that would help get the film greenlit, Industrial Light & Magic produced a range of VFX for the film, developing new simulation techniques that enabled tornadoes to interact and destroy buildings, and make trees, tankers, and even cows fly. Meanwhile, on set practical wind, debris, and mechanical effects—including a jet engine—ensured that the actors ‘felt’ the fury of these weather events.

The film went on to receive an Oscar nomination for Best Visual Effects. Now each of the Oscar nominees for Twister are returning for this special VIEW Conference PreVIEW panel: the film’s VFX supervisor, Stefen Fangmeier; Habib Zargarpour and Henry L. LaBounta; who were credited as “digital tornado designers;” and special effects supervisor John Frazier. The expert panel will be moderated by visual effects journalist and befores & afters magazine editor Ian Failes.

The panel will discuss all the breakthrough effects used in the making of Twister, and include an audience Q&A.