Program highlights include East Coast premiere of new Aardman feature, ‘Shaun The Sheep The Movie,’ North American premiere of new Studio Ghibli film ‘When Marnie Was There,’ U.S. premiere of ‘Kahlil Gibran’s The Prophet,’ and more. 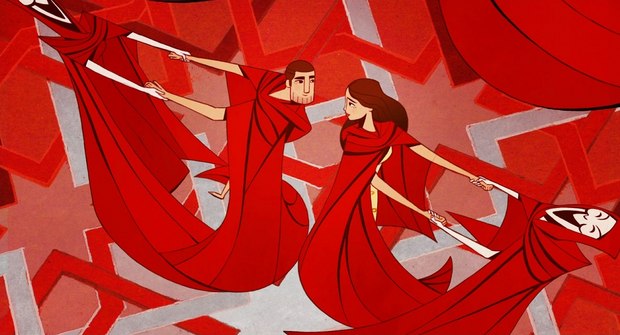 NEW YORK -- Oscar qualifying New York Int’l Children’s Film Festival has announced the complete lineup for its 2015 event, which runs February 27-March 22 at New York City’s DGA Theater, IFC Center, Scholastic Theater, SVA Theatre, and Village East Cinema. Now in its 18th year, the Festival is the nation’s largest for children and teens and will present ­all new animated, live action, documentary, and experimental shorts and features from approximately 35 countries. For the first time in 2015, the Festival is presenting two new films as each of its Opening Night and Closing Day programs. Tickets are now available on www.gkids.com.

The 2015 edition includes four weeks of groundbreaking and thought-provoking new films for ages 3-18. Highlights include US and North American feature film premieres of Studio Ghibli’s When Marnie Was There (Japan), BBC’s Enchanted Kingdom 3D (UK), Mune (France), and Moomins on the Riviera (France), the US premiere of Kahlil Gibran’s The Prophet (Various Countries), the east coast premiere of the new Aardman feature Shaun the Sheep the Movie (UK), six Oscar-qualifying short film programs, Best of Aardman Shorts, a collection of four decades of short films from Aardman Animations, and a special program of Nick Park’s Wallace & Gromit Shorts. The Festival will culminate in the Closing Night Celebration, which will include the announcement of the 2015 award winners and a special program of the Best of the Fest short films.

SHORT FILM PROGRAMS – The Festival’s wildly popular short film programs showcase the best short films from around the world, selected from over 3,000 entries. Jury-selected winners will be eligible for Oscar consideration in animated and live action short film categories. Featured in this year’s lineup are Me and My Moulton (Torill Kove, Short Films One) and A Single Life (Job, Joris, & Marieke, Short Films Two), both nominated for best animated short film at the 2015 Academy Awards. The Dam Keeper (Robert Kondo and Dice Tsutsumi, Short Films Two 2014), which won its first award at last year’s Festival (Audience Award, ages 8-14), is also nominated in the same category.

The newest film from stop-motion maestros, Aardman Animations – a grass-fed, farm-to-screen adventure brimming with humor, charm, and wit. Shaun the Sheep, the woolly stop-motion star whose vocal range is limited to bleats and baas, first appeared in Nick Park’s 1995 Oscar-winning Wallace and Gromit adventure. In his first feature film, Shaun tires of the everyday routine on Mossy Bottom Farm and concocts a plan to lead his flock in rebellion.

WHEN MARNIE WAS THERE – North American Premiere, Animation, Japan, Hiromasa Yonebayashi; In Japanese with English subtitles.

The newest feature from Japan’s famed Studio Ghibli is a sweeping story of friendship, mystery, and discovery that delivers stirring emotions and breathtaking animation as only Ghibli can. When shy, artistic Anna moves to the seaside to live with her aunt and uncle, she stumbles upon an old mansion surrounded by marshes, and the mysterious young girl, Marnie, who lives there. The two girls instantly form a unique connection and friendship that blurs the lines between fantasy and reality.

The creators of BBC’s groundbreaking Walking with Dinosaurs 3D and Earth take us on a spell-binding journey through seven realms of with extraordinary timelapse photography. Sweeping aerial shots and macro and micro lensed 3D, propel us from enchanted forests to the boiling edge of the underworld, from celestial ice-capped mountains and lava-spewing volcanoes to crashing waterfalls and deep fantastical seas. Narrated by Idris Elba.

The Prophet, by Kahlil Gibran, is among the most popular volumes of poetry ever written, selling over 100 million copies in forty languages since its publication in 1923. The timeless verses have been given enchanting new form in this painterly cinematic adventure about freedom and the power of human expression. Written and directed by Roger Allers (The Lion King), the film intersperses Gibran’s elegant verses with stunning animated sequences by Festival favorite filmmakers Tomm Moore (The Secret of Kells), Nina Paley (Sita Sings the Blues), Bill Plympton (Guide Dog), and a host of award-winning animators from around the world. Featuring the voices of Liam Neeson, Salma Hayak, and Quvenzhané Wallis, and music from Damien Rice, Glen Hansard, and Yo-Yo Ma.

THE KING AND THE MOCKINGBIRD – Animation, France, Paul Grimault; Screening both in English and French with English subtitles.

A newly restored print of Paul Grimault’s gloriously imaginative animated masterwork, based on the Hans Christian Andersen fairy tale “The Shepherdess and the Chimney Sweep.” This French animated gem originally began production in the late 1940s, but wasn’t completed until 1980. It has been mired in rights issues ever since, which prevented its release in the US until now.

Celebrate the 25th birthday of Nick Park’s absent minded, cheese-loving inventor Wallace and his faithful canine companion Gromit. Nick Park began work on A Grand Day Out as a student project, completing it after joining Aardman in 1985. Program includes A Grand Day Out and Nick Park’s next two Wallace & Gromit films, The Wrong Trousers and A Close Shave, both of which earned Oscars and secured Wallace & Gromit a place as a UK national treasure and one of the most beloved animated duos of all times.

Ballet Boys takes us through four years in the lives of three young dancers. The only boy dancers in a world of girls, they strive to get into Norway’s most prestigious ballet academy. Beautifully constructed, slow-motion dance sequences and life-altering auditions provide a pulse of drama throughout their journey, but the film is ultimately the story of their friendship, disappointments, victories, first loves, dreams, and doubts.

A story of friendship, courage, and loyalty set against the jaw-dropping scenery and alpine panoramas of the Haute Maurienne-Vanoise region of France. Sebastian lives with his grandfather, César, in a vertiginous mountain village, where he crosses paths with a giant and dirty Pyrenean Mountain Dog who the locals have dubbed “the Beast” for allegedly killing their livestock. But Sebastian sees something good in the misunderstood canine and befriends the animal, renaming her “Belle.” Their budding friendship is put to the test when Nazis march into town looking to root out a band of resistance fighters who are guiding Jewish refugees to neighboring Switzerland.

Academy Award winning director Torill Kove’s first feature film is a refreshingly warm and intimate tale based on beloved children’s book character Alfie Atkins. Seven-year-old Alfie dreams of owning a dog, but his father insists that he is too small for such a big responsibility. Undaunted, Alfie finds an unlikely ally in George, a kindly magician who performs tricks for the neighborhood kids and has just adopted a puppy of his own. Lovingly animated with thoughtful, honest character interactions, Hocus Pocus offers an emotionally and visually rich cinema experience for audiences of all ages.

The world generates over a billion tons of garbage a year, much of it ending up in poor rural communities like Cateura, Paraguay, where over 2,000 families survive by separating garbage for recycling. When a teen music program there can’t afford new instruments, a garbage picker named Cola fashions a violin from an empty oil tin – thus inspiring the Recycled Orchestra. The film follows the young musicians as they reach even greater heights, performing concerts in the US, Europe, and Asia – even sharing the stage with heavy metal super-group, Metallica.

Twelve-and-a-half-year-old Lou lives alone with her absurdly immature mother, Emma. Her mom has been in a funk lately, eating junk food in her pajamas, playing video games, and generally behaving more like a teen than her on-the-cusp-of-adolescence daughter. But all this changes with arrival of the new bohemian neighbor, Richard, who ignites her goofy mother’s romantic interests. Neel has turned the French comic and animated TV series into a quirky, mom and daughter buddy movie, with vibrant and brilliantly kitschy bubble-gum production design and plenty of cringe-worthy, awkward comedic situations.

Sixty years ago, when Finnish author and illustrator Tove Jansson launched the Moomin comic strip, little did she know it would reach 20 million daily readers in more than 40 countries. In celebration of her 100th birthday, French director Xavier Picard brings Jansson’s carefree and adventurous Moomin family to life, with delicately animated characters set within beautifully designed and colored backgrounds, and the comic’s traipsing storylines translated to the screen with just the right amount of absurdity and humor.

A world of wonder, magic and mythology is the setting in this sumptuously animated CGI adventure about a land divided between the realms of day and night. As legend has it, the first Guardian of the Sun threw a harpoon into the cosmos and roped the sun to bring light and warmth to all of humanity. Then the Guardian of the Moon lured the moon to the Land of Darkness to provide a balance to the sun and supply the world with dreams. At a momentous ceremony to appoint the two new guardians, an accident seems to occur; the heir apparent is passed over, and the title Guardian of the Moon is bestowed on the waif-like Mune, a small and frightened forest faun who seems wholly unprepared to take on such a weighty responsibility.

Festival award-winning Wolf Daddy director Chang Hyung-yun has created a wholly original, exuberantly outrageous, sci-fi love story unlike anything before it. An orbiting, out-of-commission female satellite picks up a lovelorn pop song on its radio antenna and descends to Earth to try to discover who could be the source of such heartfelt emotions. On the way, it is transformed into the titular Satellite Girl, complete with Astroboy-like rocket shoes and weapon-firing limbs, while the balladeer in question — a loser twenty-something playing at an open mic in a coffee shop — meets the fate that befalls all broken-hearted lovers: he is turned into a farm animal (albeit one who can walk around in a poorly-fitting human suit).

Netherlands, 1943. Best friends Tuur and Lambert spend their time dreaming up adventures and discovering secret passages in the caves and forests that surround their close-knit village. Homemade wooden pistols serve as props in their playful war games, as they make light of the conflict that is building all around them. When new girl Maartje enters their social circle, the boys’ friendship faces a challenge typical of adolescence – and Lambert begins to feel more and more like the third wheel. Secrets of War, with its lush backdrops and strong emotional performances from three young leads, expertly balances the universality of shifting young friendships with the moral complexity of war.

Though they’re from opposite ends of the food chain, Wolfy and Tom (a wolf and rabbit, respectively) are best friends. Wolfy has always believed he was an orphan, until one day a gypsy tells him that his mother is still alive in the distant dynasty of Wolfenberg, Land of the Wolves. Despite his fear, Tom agrees to accompany his friend as they venture far from their peaceful countryside home. They arrive in the midst of Carne Festival— a grand meeting of the world’s most renowned carnivores — and Wolfy’s quest for self-discovery quickly turns into Tom’s quest for survival. This beautifully animated film is based on the wildly popular French children’s book series LouLou from writer and director Grégoire Solotareff.

Established in 1997, New York Int'l Children's Film Festival is an Oscar qualifying event and North America's largest film festival for children and teens ages 3-18. The most recent edition attracted a sold-out-in-advance audience of 30,000. The 2015 event takes place February 27-March 22, with 100+ films from around the world, premieres, retrospectives, filmmaker Q&As, filmmaking workshops, audience voting, and a Closing Night Celebration. Festival sponsors include The Academy of Motion Picture Arts and Sciences, The New York Times, Variety, WNYC, and Scholastic, with funding support by National Endowment for the Arts, NY State Council on the Arts, and NYC Department of Cultural Affairs.