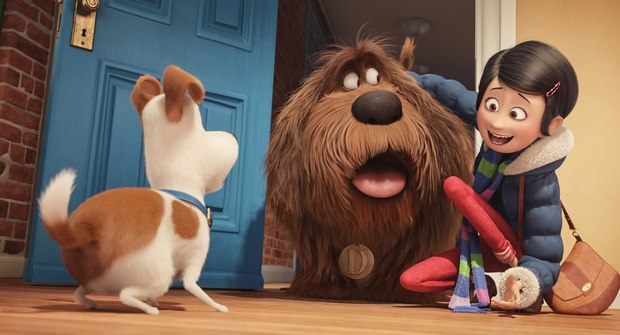 On the heels of the holiday-themed trailer released in December, Illumination Entertainment has unveiled the second full-length trailer and new poster art for its upcoming animated feature, The Secret Life of Pets.

For their fifth fully-animated feature-film collaboration, Illumination Entertainment and Universal Pictures present The Secret Life of Pets, a comedy about the lives our pets lead after we leave for work or school each day.

While the first trailer showed viewers the cute little secrets of the admittedly adorable pets, the latest version provides a little more story, outlining an oddball-buddy plot. Louis C.K. voices Max, a terrier living in New York City. He loves life with his owner Katie (Ellie Kemper), and is dismayed when she brings home a new “brother” for Max, a big sloppy mutt named Duke (Eric Stonestreet). One thing leads to another, and before they know it Max and Duke find themselves caught up in an army of abandoned pets led by a bunny named Snowball (Kevin Hart):

Taking place in a Manhattan apartment building, Max’s life as a favorite pet is turned upside down, when his owner brings home a sloppy mongrel named Duke. They have to put their quarrels behind when they find out that an adorable white bunny named Snowball is building an army of abandoned pets determined to take revenge on all happy-owned pets and their owners.