New Trailer Released for Marvel’s ‘Guardians of the Galaxy’

A new trailer is released for Disney and Marvel’s ‘Guardians of the Galaxy,’ which shows Vin Diesel and Bradley Cooper speaking in the guise of their CGI “Groot” and “Rocket” characters. 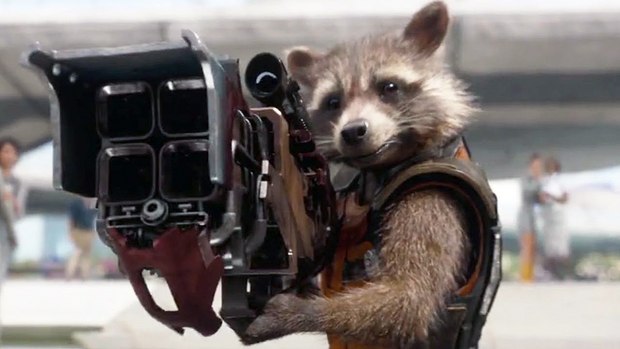 A new trailer has been released for Disney and Marvel’s Guardians of the Galaxy.

An action-packed, epic space adventure, Guardians of the Galaxy expands the Marvel Cinematic Universe into the cosmos, where brash adventurer Peter Quill (Chris Pratt) finds himself the object of an unrelenting bounty hunt after stealing a mysterious orb coveted by Ronan (Lee Pace), a powerful villain with ambitions that threaten the entire universe. To evade the ever-persistent Ronan, Quill is forced into an uneasy truce with a quartet of disparate misfits -- Rocket, a gun-toting raccoon (voiced by Bradley Cooper), Groot, a tree-like humanoid (voiced by Vin Diesel), the deadly and enigmatic Gamora (Zoe Saldana) and the revenge-driven Drax the Destroyer (Dave Bautista). But when Quill discovers the true power of the orb and the menace it poses to the cosmos, he must do his best to rally his ragtag rivals for a last, desperate stand -- with the galaxy's fate in the balance.

The first teaser was a brilliant example of introducing general audiences to an offbeat or outside-the-box genre property by using John C. Reilly’s annoyed and sarcastic narration as an audience surrogate. The new trailer, set to the song “Spirit in the Sky,” shows off more spectacle but retains the same cheeky tone while offering a roll call for its heroic leads. The big “reveal” is of course Vin Diesel and Bradley Cooper actually speaking in the guise of their CGI “Groot” and “Rocket” characters.

Written and directed by James Gunn, Guardians of the Galaxy arrives in theaters August 1.