In the ‘Your Name’ and ‘Weathering with You’ director’s latest film, Nanoka Hara voices Suzume, a young woman who finds herself opening a series of doors to disaster that take her on a mysterious journey; slated for a November 11 release in Japan, it rolls out in major territories in early 2023. 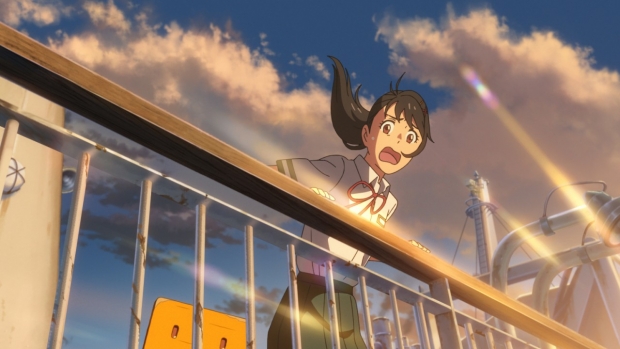 Crunchyroll, Toho, and CoMix Wave have released the latest trailer for Makoto Shinkai’s upcoming film, Suzume (Suzume no Tojimari). Slated to debut in Japan on November 11, the film will begin it’s global release in all major territories in early 2023. Crunchyroll is the sole North American distributor and will team up with Sony Pictures Entertainment for distribution in Latin America, Australia/New Zealand, the Middle East, and portions of Europe. In French- and German-speaking Europe, the film will be co-distributed by Crunchyroll, Sony Pictures Entertainment, and Wild Bunch International.

About the new trailer:

Though still surrounded by mystery, Shinkai states, “I created this with the intention of introducing Suzume.”

The new trailer looks at the key visuals and keywords revealed in April’s teaser, including “Traveling Young Man,” “White Cat,” “Small Chair,” and “The Key to Doors.” “Suzume,” the song composed for the film, is also featured in the trailer, as is Nanoka Hara’s performance in the lead role of Suzume. Shinkai, known for his films Your Name (2016) and Weathering with You (2019), further explains [that in the trailer], viewers witness Suzume’s wide range of emotions, from her comical reactions to her serious determination causing more questions to arise about her journey.

Suzume leaves viewers with more mysteries and questions, leaving them with the words:

“I wandered beyond a space
“Where it seemed all time had melted together
“in the sky.”

On the other side of the door, was time in its entirety -

A coming-of-age story for the 17-year-old protagonist, Suzume, set in various disaster-stricken locations across Japan, where she must close the doors, causing devastation. Her journey begins in a quiet town in Kyushu (located in southwestern Japan) when she encounters a young man who tells her, “I’m looking for a door.” She finds a single weathered door standing upright amid ruins as though it was shielded from whatever catastrophe struck. Seemingly drawn by its power, Suzume reaches for the knob… Doors begin to open one after another all across Japan, unleashing destruction upon any who are nearby. Suzume must close these portals to prevent further disaster.