Animated short co-produced by Vivement Lundi! and Novanima Productions shows the consequences of the Indochina War for a repatriated family who arrives at the French transit camp of Saint-Livrade. 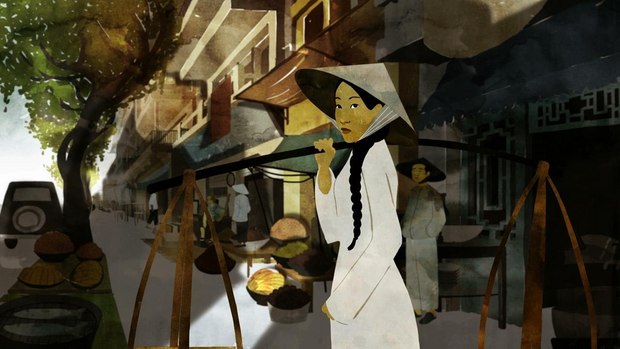 Winning 15 awards during its festival run, including a jury award at NYICFF and nominations for both a César Award and the Cartoon d’Or, France’s Sous tes doigts (Under Your Fingers) is now one of the ten films shortlisted for the Oscar for best animated short.

It’s a wonderful recognition for the film written and directed by Marie-Christine Courtès. Her script, based on a true story, tells the Indochina War’s consequences for a repatriated family who arrives at the refugee camp of Saint-Livrade in France, where more than 1200 Indochinese stayed in 1956.

“It’s a movie without dialogue, in which the silence of the characters becomes the most meaning shape of the infinite mourning, the violence of the unspoken and restores with an admirable intensity the tragic poetry of these feminine fates taken in the storm of the history,” says Delphine Robic-Diaz, professor at University of Montpellier and writer of “Indochina War in French cinema,” about the film. “Under your fingers sublimates this re-conquest of past by the emotional power of the gesture, this dance cross which builds an artistic bridge between past and the present, between France and Vietnam. A magnificent atypical, modern and audacious narrative which put with a provocative sensibility the question of the necessity of communicating beyond the words on this scar stories.”

The film follows Emilie, a young mixed-race Asian girl, who, on the day of her grandmother’s cremation, buries herself into her grandmother memories. Emilie discovers the Indochina of Hoa, her grandmother’s romantic encounter with Jacques (a French colonist), the birth of Linh (Emilie’s mother) and her tragic departure to France in 1956. With Linh, Emilie relives their arrival at the camp of Sainte-Livrade, and the exploitation of the Indochinese women by the market gardeners of Lot-et-Garonne. Between memories, dance, anger and traditional rituals, Emilie learns to accept her heritage.

In writing the screenplay of her first narrative film, Courtès drew inspiration from a documentary she directed in 2004, Le Camp des Oubliés, where she tells the story of the transit camp of Saint-Livrade and the forgotten women of the Indochina War. By returning to this forgotten passage of French colonial history, Courtès aims to demonstrate the difficulty of accepting this symbolic heritage tainted by humiliation and hidden for decades in the collective memory.