The seriously adult show, in terms of bloodshed, about an Aztec boy named Izel, who finds himself caught in the middle of the Gods’ war for the future of humanity, premieres November 21. 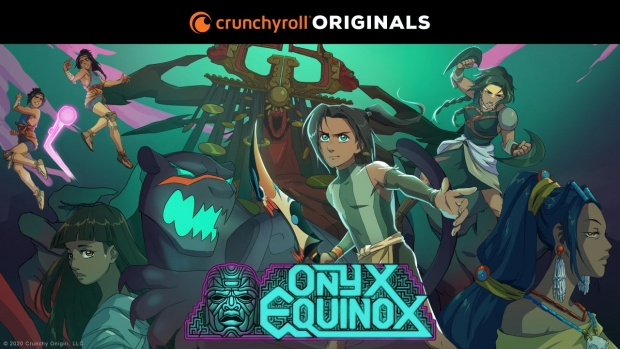 Just in time for Halloween, Crunchyroll released a dark trailer and more details about the upcoming Crunchyroll Original series Onyx Equinox. While the story highlights a young protagonist, the animation shows a seriously adult side in terms of bloodshed. This dark trailer is not for the squeamish! The series premieres November 21.

“Viewers of Onyx Equinox can expect an adult story, both in terms of on-screen action and the themes we tackle throughout the series,” commented creator, showrunner, and executive producer Sofia Alexander. “We're going to journey with Izel as he is forced to save a world he doesn’t believe he has a place in, coming face to face with both the darkness in the world and within himself.”

The gods are at war for the future of humanity, and an Aztec boy named Izel finds himself caught in the middle of their dangerous game. To save humankind, he must complete an impossible task--closing the five gates to the underworld. Izel reluctantly agrees, but only after learning his quest will also correct a terrible tragedy.

His journey to become humanity’s champion will be one of hope and despair, of trust and betrayal, where Izel must confront his own darkness and decide if the human race--with all its flaws and contradictions--is worth saving. Also revealed are details about the main characters -including their blood type!

Zyanya: [ziannia] - A warrior with a powerful ability, seeks to restore her destroyed city.

Xanastaku: [sha - NAS - tah - coo] - A priestess in Izel’s party. Desires to redeem her dark past.

The series will be dubbed in Spanish, Brazilian Portuguese, French, and German at launch.