Produced by Lupus Films, hand-drawn, feature-length adaptation of the award-winning graphic novel by writer and illustrator Raymond Briggs is due in U.K. cinemas on October 28th. 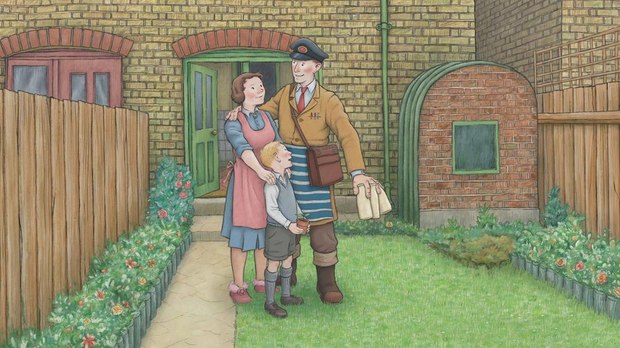 The first trailer for Ethel and Ernest, the hand-drawn, feature-length adaptation of the award-winning graphic novel by writer and illustrator Raymond Briggs (The Snowman, Fungus the Bogeyman), has arrived online.

Based on the lives of Briggs’ parents, Ethel and Ernest is produced by Lupus Films in association with Ethel & Ernest Productions, Melusine Productions and Cloth Cat Animation, and supported by the BFI, BBC, Film Fund Luxembourg, Ffilm Cymru Wales and the Welsh Government. The film follows lady’s maid Ethel and milkman Ernest through their four decades of marriage, from the late 1920s to the early 70s, as they live through tumultuous events in British history including the Depression, World War II and the dawn of television.

Lupus Films previously produced The Snowman and the Snowdog, the sequel to The Snowman, the classic animated TV special for which Briggs is perhaps best known. Ethel and Ernest is directed by Roger Mainwood (The Wind in the Willows, Beatrix Potter’s The Tale of Two Bad Mice, Johnny Town Mouse, and Meg and Mog), who took over for the late John Coates following the famed animation director’s passing in 2012. Mainwood has been documenting the film’s progress on a well-maintained production blog charting the progress of the film.

The film, which features the voice talents of Jim Broadbent, Brenda Blethyn, Luke Treadaway, Pam Feris, June Brown, Virginia McKenna, Roger Allam and Peter Wright, is due in U.K. cinemas on October 28th, and will also be broadcast in the U.K. by the BBC later this year.

Heart-warming, humorous and bittersweet, the film follows the lives of lady’s maid Ethel and milkman Ernest from their first chance meeting in 1928, through the birth of their son Raymond in 1934, to their deaths, within months of each other, in 1971.

From the socially stratified 1920s to the moon landing of 1969, the film depicts, through Ethel and Ernest’s eyes, the most defining moments of the 20th Century: the darkness of the Great Depression, the build up to World War II, the trials of the war years, the euphoria of VE Day and the emergence of a generation from post war austerity to the cultural enlightenment of the 1960s.

Echoing the lives and concerns of the London working classes through momentous social and political change, ETHEL & ERNEST is a heartfelt and affectionate tribute to an ordinary couple and an extraordinary generation.

The 2D-animated feature film is produced for Ethel & Ernest Productions by Lupus Films’ Camilla Deakin and Ruth Fielding (The Snowman and the Snowdog, The Hive). Raymond Briggs is an Executive Producer on the film, Stephan Roelants will produce for Melusine Productions and Jon Rennie is Executive Producer for Cloth Cat Animation. International sales are being handled by The Little Film Company with Robbie Little also acting as Executive Producer.