Cable network details plans to head into the new season with more than 650 episodes of new and returning series, including ‘Rusty Rivets,’ ‘The Loud House,’ ‘Bunsen is a Beast!,’ ‘Mysticons,’ ‘Welcome to the Wayne,’ ‘Pinky Malinky,’ and animated TV movies ‘Albert’ and ‘Hey Arnold!’ 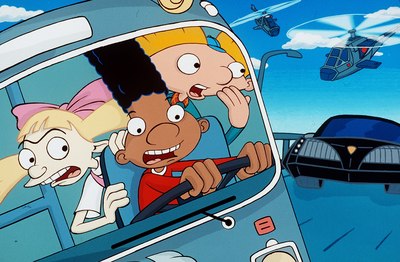 NEW YORK -- At its annual upfront presentation at Alice Tully Hall in New York City’s Lincoln Center, Nickelodeon detailed its upcoming plans powering its expanding reach and growing footprint as it heads into the season with more than 650 episodes of new and returning series. Through fostering close relationships with its audience, partners and the creative community, Nick has kept its content pipeline full in every genre, on every screen and in every territory, all contributing to owning the top shows year to date for Kids 2-11 and preschoolers; a significant increase in share; and the number-one position year to date with Kids 2-11 and preschoolers, a standing it had for all of 2015, as well.

“We have worked hard to deepen our relationships with our audience, our partners and the creative community to keep our momentum growing, and we remain unwavering in our mission to put kids first and devote every resource to making the world a more playful place,” commneted Cyma Zarghami, President, Viacom Kids and Family Group.

Carolina Panthers quarterback Cam Newton also detailed his new series, All In with Cam Newton, where he works with real kids to help make their dreams come true. Rob Dyrdek made a special appearance to talk about two new series he is producing for Nick: Crashletes, a viral sports clip series hosted by New England Patriots’ Rob Gronkowski; and Jagger Eaton’s Mega Life (working title), a docu-series that follows the 15-year-old skateboarding phenom as he skates around the world and hangs out with his idols.

Nickelodeon’s upfront presentation was also punctuated with a special appearance from New York Knicks power forward, Carmelo Anthony who was on hand to tout his new TMNT x Melo collaboration, a Teenage Mutant Ninja Turtles-branded capsule collection of boys’ apparel and accessories launching in all Macy’s stores in May.  In a surprise finale, top-selling artist Flo Rida closed with a performance of his latest hit single, “My House.”

Nickelodeon currently owns the top animated series on TV. It announced the renewals of animated hit series: SpongeBob SquarePants, for seasons 10 and 11; and the second season pickups of Harvey Beaks and Pig Goat Banana Cricket.

As previously announced, Nickelodeon’s slate of new animated series on deck are:

Nickelodeon currently owns the top live-action series with Kids 2-11 on all TV, led by Game Shakers. The net announced today the renewal of the two series from hitmaker Dan Schneider: Henry Danger, for season three; and Game Shakers, for season two. Additionally, Nick has picked up another live-action hit The Thundermans for season four.

As previously announced, Nickelodeon’s slate of new live-action series on deck are: