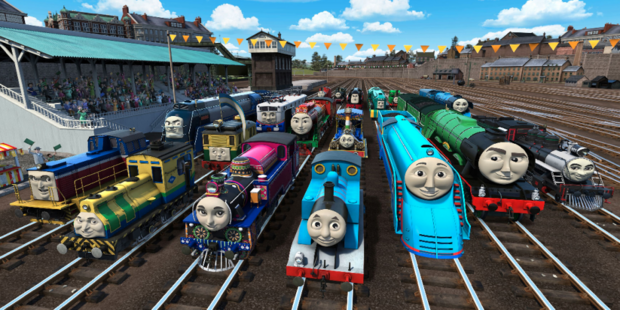 NEW YORK -- The world’s most famous blue engine, Thomas the Tank Engine, is gearing up for his biggest international adventure yet; Thomas & Friends special The Great Race will premiere exclusively on Discovery Kids Latin America, as well as the latest series 20 of Thomas & Friends throughout the month of December on its different feeds. This marks the eighth CGI season of the show on Discovery Kids with all new episodes for Latin American fans in Spanish and Portuguese.

The new Thomas & Friends 60-minute movie, The Great Race, is the 11th feature film for the iconic blue engine. It includes the most songs ever featured in a Thomas movie special, which sees him take on an exciting adventure at the Great Railway Show. Along the way, he meets interesting and fun new trains from all over the world including India’s Ashima, Belgiums’ Axel, China’s Yong Bao, Russia’s Ivan, France’s Etienne, Italy’s Gina, Australia’s Shane and Latin America’s Raul (Brazil) and Carlos (Mexico).

The movie had its theatrical premiere in Mexico City last October, across 30 cinemas nationwide and a red carpet premiere with the participation of celebrity musician, Leonardo de Lozanne.

“We can’t wait to share the exciting world of Thomas & Friends with children and families across Latin America on Discovery Kids with the release of The Great Race, our very first musical adventure,” said Christopher Keenan, SVP Global Content & Executive Producer at Mattel Creations. “Showcasing our commitment to quality and innovation, this film will treat audiences to unparalleled production values, sing-along songs and over a dozen exciting, new engine characters from around the globe. We’ve also got a great new season of the show, which is really fun and dynamic but keeping the educational values we all love about the show.”

“We are very proud to be the network that offers the smallest viewers of the household this exciting new movie, where kids and parents will be able to see this iconic character in a new and exciting context,” said Flavio Medeiros, Director of Programming and Acquisitions for Discovery Kids Latin America. “ We are also looking forward to the premiere of new episodes of this beloved series during this festive season of the year.”