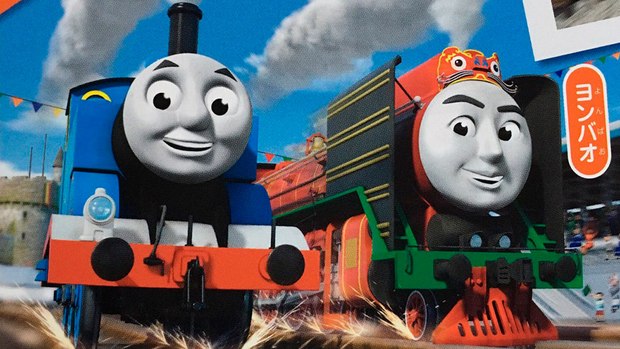 The 81-minute film also will see the big-screen debut of the franchise’s first Chinese character, Yong Bao. The film sees the iconic blue engine take on an exciting adventure at the Great Railway Show where he meets a host of new characters, including the new exotic train Ashima of India, alongside eleven other international trains including: Yong Bao of China, Axel of Belgium, Raul of Brazil, Ivan of Russia, Etienne of France, Gina of Italy, Rajiv of India and Shane of Australia among many others.

The Great Race has been specially dubbed in Mandarin and distributed by Huaxia Film Distribution Co. Ltd. The Sept. 22 theatrical release will continue through to China’s Golden Week in October.

The eleventh Thomas & Friends feature-length film, The Great Race has already enjoyed a successful theatrical release in several other countries including: the United Kingdom, Singapore, Hong Kong, Mexico, New Zealand, Australia, and for the first time ever, Italy.

“This is the second time that Thomas & Friends has secured a theatrical release in China and one of the very few non-native young children’s movies to be released which is a huge honor and further demonstrates the strength of the brand and affinity with families and children in this important market."

Thomas & Friends TV series is available in China through all major digital platforms including iQiYi, YouKu, QQ, LeTV, TMall Box and BesTV.  The brand franchise is also available in a variety of formats and products including live events, such as Thomas Town and Thomas the Musical Live Show; consumer products; publishing; and digital radio.