New Short from ‘The Simpsons’ Skewers the 2016 Election 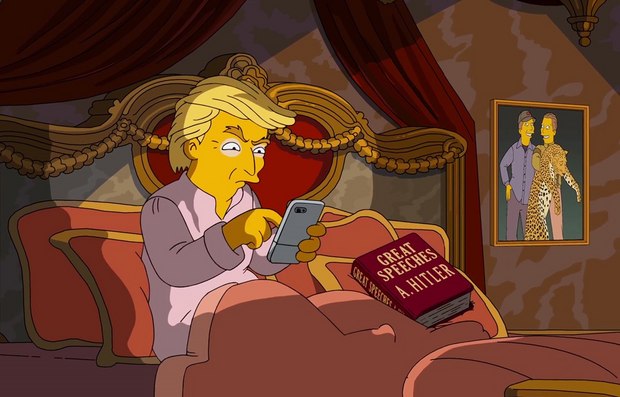 The Simpsons have dropped a scathing animated take on the 2016 election in a new short, 3 a.m., that settles once and for all who Homer will be voting for in November.

The short, released online on Saturday, combines a rough take on Aristophanes’ Lysistrata with some digs at GOP nominee Donald Trump. A parody of Democratic candidate Hillary Clinton’s now-famous 2008 political ad, “3 a.m. phone call,” the short riffs on the idea that Trump is not temperamentally fit to run the country. Tiny hands? Yup. Orange makeup? Uh-huh. Distracted by trivia? Completely.

Too preoccupied to take a call from the red phone because he’s busy firing off snarky tweets about Massachusetts Senator Elizabeth Warren, the Presidential hopeful grudgingly agrees to go to the situation room, but only after his hair and makeup are finished. Trump also orders an aide to put his name on the Lincoln memorial, and to force Chris Christie to eat a worm, “just for laughs.”

Check it out in the player below:

This isn’t the first time The Simpsons have weighed in on the political landscape: back in February FOX released “The Debateful Eight,” and in 2012 we saw Mr. Burns endorse Mitt Romney:

And in 2000, in “Bart to the Future,” the show predicted a Trump presidency that would be succeeded by Lisa Simpson: