International premiere of new short film by Dutch filmmaker and artist, Rosto, kicks off the 2015 edition of the Holland Animation Film Festival in Utrecht. 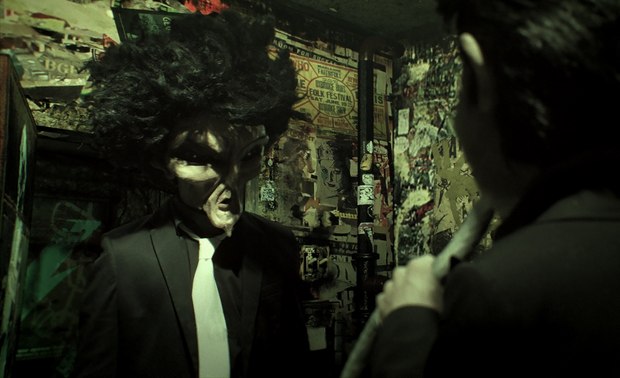 Amsterdam, The Netherlands -- Splintertime, the new short film by Dutch filmmaker/artist Rosto, had its International premiere at the Holland Animation Film Festival in Utrecht. The film was screened during the opening night and was selected for the international competition for shorts.

Splintertime is a short film featuring music and characters of Rosto's music project Thee Wreckers, a noisy outfit of spirits. Splintertime is the third in a series of four Wreckers-films, but can easily be enjoyed without any knowledge of the previous projects. Splintertime takes off where Lonely Bones, released in 2013, ended. The four band members drive off in an ambulance, leaving a world behind that has been reduced to complete emptiness.

Although Rosto links characters and stories in all his work, music is what really connects his projects. "Music has always been a driving force in my work," Rosto explains. "The entire tetralogy is based on Wreckers-songs but these shorts are no music videos, since there are no records to sell. The films show what the music looks like. Call it Fantasia for the Rock ‘n’ Roll age, if you will."

"Compared to my previous short Lonely Bones, Splintertime is less dark and gloomy," Rosto says. "The synopsis optimistically reads: Zip up and let’s dance to the sound of breaking glass. However, making the new film was quite a hellish experience from time to time. Just like in my previous films, I’ve used live action and mixed animation techniques. This time, the live action was extremely demanding – especially for the performers. Sometimes it was almost like Cirque du Soleil, including dancers performing aerobatics high in the air. I’m glad the result made it worth it."

Last month Splintertime had its world premiere at the International Short Film Festival in the French city Clermont-Ferrand. The film was received favourably during the prestigious festival.

The Holland Animation Film Festival (HAFF) is an annual international festival in Utrecht. The festival provides an international platform for animation film and is meeting place for animation professionals and rising talent. Professional productions are shown alongside student films and commercials. There are international competitions for features, shorts, commissioned films and web films. HAFF also presents thematic programmes and retrospectives, talkshows, masterclasses, debates and an educational program.