New 2D-animated PSA by Steve Moore begins with the idea that immigration is an opportunity, not a threat. 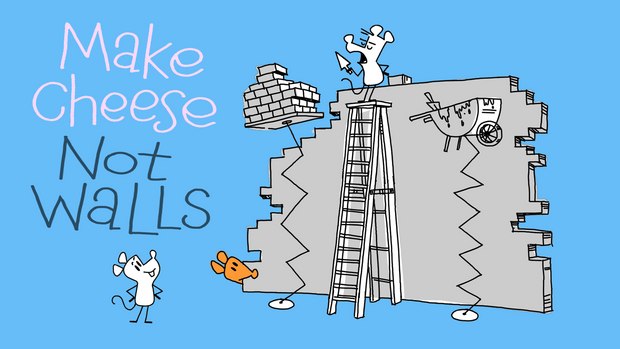 LOS ANGELES -- Our Next 4 Years, a new volunteer-run organization of concerned animation professionals formed in the wake of the election, has released a new animated PSA by Steve Moore that focuses on immigration.

Beginning with the idea that immigration is an opportunity, not a threat, “Make Cheese, Not Walls” is a call to action to let your elected representatives know you don’t want that cheesy wall!

While not affiliated with any particular company, ON4Y members have worked at Disney, DreamWorks, Cartoon Network, Nickelodeon, and pretty much every other studio, big and small. The group’s members include Oscar, Emmy, Annie and Humanitas award winners and nominees. Eager to use the skills of its members to communicate the concerns of a population both worried and energized by the recent election, Our Next 4 Years intends to showcase outstanding animation in the service of a reasoned, informative and entertaining take on issues important to Americans.

Employing varying styles of animation, Our Next 4 Year’s approach is to stay positive, deal in facts, and help move people to action. The group plans to release a slew of Earth Day-themed PSAs later this month, and Science-themed spots after that. Learn more about the project at Our Next 4 Years.