From first-time feature director Peter Sohn, ‘Pixar’s ‘The Good Dinosaur,” a buddy comedy about a dinosaur and his boy, arrives in theaters November 25, 2015. 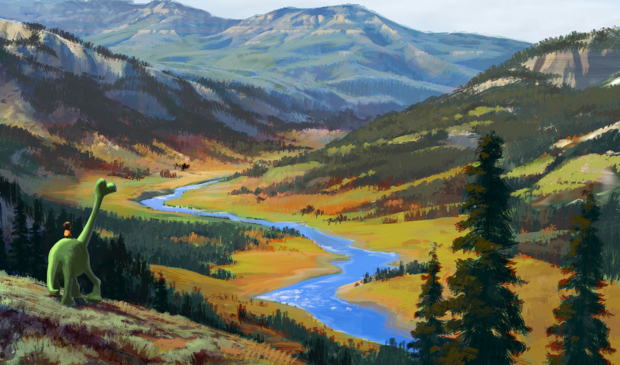 With a little under a year to go until the film arrives in theaters, two new pieces of concept art for Pixar’s forthcoming animated feature, The Good Dinosaur, have surfaced onto the web.

#TheGoodDinosaur is just over the horizon. Coming to theatres 1 year from today! pic.twitter.com/sG0ZLsSApi

The second image is courtesy of the Los Angeles Times story, “Pixar redraws the lines for 'Good Dinosaur,'” which traces the evolution of the project through a change of directors and a story streamline. First-time feature director Peter Sohn, an artist at the studio in Emeryville, CA since 2000, quietly took over the film a few months after Pixar executives removed its first director, Bob Peterson, amid creative concerns about the project.

“The heart of the story remains the same,” Sohn is quoted as saying to the Times. “It’s always been about this young dinosaur growing up. But the world itself has changed a lot. Nature has become a character.”

Here is the official synopsis:

The Good Dinosaur asks the generations-old question: What if the cataclysmic asteroid that forever changed life on Earth actually missed the planet completely and giant dinosaurs never became extinct? The film is a humorous and exciting original story about Arlo, a lively 70-foot-tall teenage Apatosaurus with a big heart. After a traumatic event rattles Arlo’s tranquil community, he sets out on a quest to restore peace, gaining an unlikely companion along the way -- a young human boy named Spot.