Lumiere the candlestick and Cogsworth the mantel clock from Disney’s Beauty and the Beast’ open new theatrical trailer for DreamWorks Animation’s ‘The Boss Baby,’ in theaters March 31. 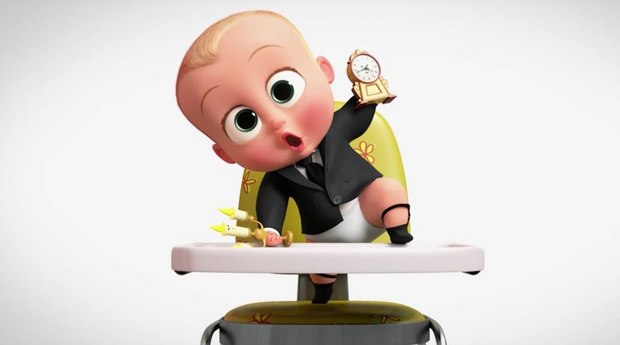 DreamWorks Animation and 20th Century Fox have released the final trailer for The Boss Baby, and it pulls out all the stops.

In an unconventional marketing ploy, the new trailer opens on Alec Balwin’s Boss Baby strapped into a high chair playing with Beauty and the Beast figurines of Lumiere the candlestick and Cogsworth the mantel clock as he invites Disney fans to fans to be his guest: “Look, you’ve all made an excellent decision to come see this movie today. You’re clearly shrewd, so let me lay this out for you. On March 31, my movie, DreamWorks’ The Boss Baby will be coming out,” he says in the new theatrical trailer, entitled “A Tale NOT As Old As Time.” And then things get really weird:

Directed by Tom McGrath (Madagascar franchise, Megamind), produced by Ramsey Naito (The SpongeBob SquarePants Movie) and Denise Cascino (Mr. Peabody & Sherman, Megamind) and written by Michael McCullers (Austin Powers films), Boss Baby is a billed as a fantastical family comedy about the bossiest member in every family -- the new guy.

Inspired by Marla Frazee’s award-winning picture book of the same name, The Boss Baby is “a hilariously universal story about how a new baby’s arrival impacts a family, told from the point of view of a delightfully unreliable narrator, a wildly imaginative seven-year-old named Tim.” The CG-animated feature arriving in theaters this Friday features the voices of Baldwin as the Boss Baby alongside Steve Buscemi, Jimmy Kimmel, Lisa Kudrow and Miles Christopher Bakshi.

From the day his baby brother arrived (in a cab…wearing a suit), seven-year-old Tim (voiced by Bakshi) knew this fast-talking briefcase-carrying baby (Baldwin) was trouble -- after all, there’s only so much love to go around, right? But as Tim embarks on a mission to win back the sole affection of his parents, he stumbles upon a secret plot by the CEO of Puppy Co. (Buscemi) that threatens to destroy the balance of love in the world -- and this brash baby executive masquerading as his new brother is at the center of it all. Now, they must come together as true brothers to stop the dastardly scheme, save their parents, restore order to the world, and prove that love is indeed an infinite force.

The Boss Baby arrives in theaters everywhere on March 31, 2017.