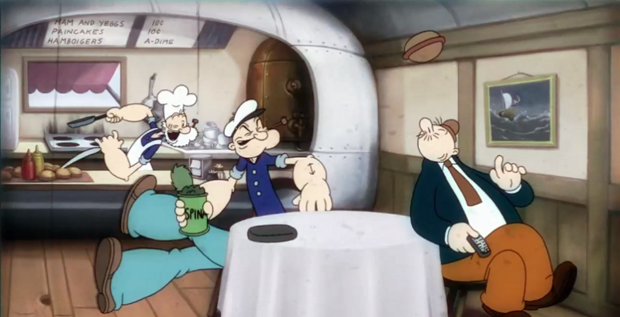 The UK’s Passion Pictures has announced that Stockholm-based directors againstallodds, aka Niklas Rissler and Derek Picken, have joined its roster of talent for UK and US commercial content representation.

Coinciding with the announcement comes the release of Gladly Tuesday, a new commercial created by Boston advertising agency Hill Holliday for Bank of America, directed by againstallodds through Passion.

The 30-second spot voiced by Will Arnett was made in the style of the 1930s-era Popeye cartoon and stars several of its classic characters including Bluto, Olive Oyl, Popeye himself and J. Wellington Wimpy, who demonstrates the functionality of Bank of America’s mobile banking app by “gladly” paying his debts via his mobile phone and hence “finally making good on his word.”

“We liked Popeye as children so it was really nice to get reacquainted with him,” say Rissler and Picken. “We love the 1930s-1940s style of animation at againstallodds and Popeye stands out as it's quite brutal in a very entertaining way.”

“The biggest challenge was to integrate the phones into the style as they are so clearly anachronistic in the context,” explain the directors, who used traditional animation techniques and thorough attention to detail to create the vintage aesthetic, which involved hand-drawing each frame and, after careful analysis, mimicking movement patterns and frame rates from the original cartoon. “After that it was a matter of taking it through an ageing process; scratches, desaturation, line bleed and such. It was very much a case of careful observation.”

Simon Quinn, Producer at Passion adds, “againstallodds did some tests for the pitch and you almost couldn’t believe they weren’t from the 1930s. It’s amazing that modern directors were able to recreate that classic style because for most it’s a lost art.”