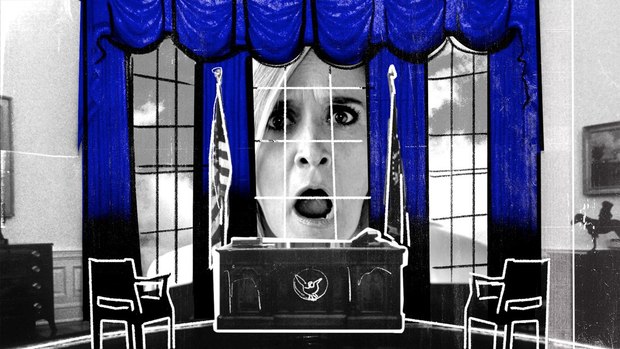 Viewers of TBS’ Emmy Award-winning Full Frontal with Samantha Bee have surely noticed something new and exciting - the show's main title sequence. Designed and directed by female business owner Erin Sarofsky and her team at Chicago-based production company Sarofsky, the highly stylized 20-second introduction presents the show’s star, Samantha Bee, the way the world increasingly sees her: as a curious giant in the cultural landscape.

The concept was initially developed by the producers and writers of Full Frontal after weeks of brainstorming on how to fine tune how they see their place in late night. "I loved the idea right off the bat," Sarofsky began, before further summarizing the project's ambitious creative briefing. "Simply put, we were asked to create a main title creatively reflecting Samantha's tone, persona and content. As a smaller-framed woman who has a larger-than-life presence, Samantha's words carry a lot of weight. Still, she is the first person to joke about herself. Self-deprecating and highly self-aware, she is a master at turning it back around and using herself as the punch line."

Show principals including executive producers Miles Kahn, Alison Camillo and Pat King also emphasized the need to convey Bee’s strong sense of purpose, motivations, inquisitive nature, and her drive to shake things up. For Sarofsky, who has built her career resolving creative puzzles like this for a Who's Who of entertainment industry all-stars and brand marketers, even being invited to pitch was the stuff of dreams.

“As a woman, I know how hard it is to strike the right tone with people,” she explained. “In whatever we came up with, I wanted to communicate what a bad-ass I think she is... slicing through the messy political landscape each week and doing it all with a wink. To be such a powerful, hilarious figure in the mix, calling it as she sees it, is courageous and bad-ass beyond words.”

Beating out scores of other smashing ideas, Sarofsky's chosen approach combines a "punk rock poster" aesthetic with the gigantic Bee idea. "There was something endearing and honest about the look of that approach, melded with the concept of her being a giant," Sarofsky added. The specific scenarios set a colossal Bee in familiar terrain, standing up for issues like human rights, legislature, leadership, representation and activism. Donning signature blazer and high heels while towering above American neighborhoods, cityscapes and monuments, she shakes hands (then "fan girls" a bit) with the Statue of Liberty; dismantles and consumes a section of the border wall; spies inside the White House and Capitol; battles a 5-headed hydra of pundits; and rallies a woman's march... before defacing a poster of herself as she walks off the stage.

For editor Dustin Kaufman of Cutters, the pundit hydra deftly highlights Sarofsky's creative brilliance. "To me, that moment perfectly embodies the loudmouth talking-head media landscape we are submerged in... and Samantha's actions represent exactly how I feel every time I watch the news," he noted. "I seldom use the word 'inspiring' in a non-facetious way, but Erin Sarofsky is inspiring. A true creative in every sense, she's always thinking of wild ideas to play around with." While the title sequence's background imagery is either stock or computer-generated 3D, the footage of Samantha was captured on stage in Vancouver in August, during a single day of production. For that shoot, Sarofsky once again enlisted director of photography Mike Bove, a key team member from her main title projects for Netflix's Friends from College and TNT's Animal Kingdom.

"We had a lot to capture that day, and we also did a ton of improv work," Sarofsky confirmed. "Since much of the comedy in the finished piece comes from Samantha's interactions with the background elements, our very best footage came from working through the scenarios on the set."

To maximize their time with the star, Bove painstakingly designed the lighting and the green screen stage set to allow them to capture Samantha's movements from head-to-toe. Shooting in 4K resolution with the ARRI Alexa Mini camera package and Leicra Summicron-C prime lenses, Bove explained, "The Mini has the bit-depth and latitude to provide an extremely clean key for Sarofsky's VFX artists." Back in the studio, Sarofsky's executive producer Steven Anderson, senior producer Bryan Haney, designers Duarte Elvas and Levi Reardon, and designer/animators Josh Smiertka, Leah Evans, Jake Matthews and Tanner Wickware all focused on finessing their animated elements and the project's finishing. While they set out to instill a stop-motion feel, showcasing Samantha's performances and facial expressions was paramount.

Among the project's deliverables were a few unusual assets: along with the :20 version, Sarofsky delivered :10 and :3 versions, too. There are also several alternate endings and captions, which will be rolled out on TV, online and in out-of-home marketing (including billboards) as the season progresses.

Sarofsky concluded, "It's rare to work on a project that is deeply meaningful to you. We got to collaborate with a woman we respect and admire. We developed a unique visual point of view in a category littered with other personas and styles...where women are underrepresented, and even harder to brand. Here's hoping that it will motivate change, that it will help get people more accustomed to women in positions of power, that they will vote for more of us, hire more of us, promote more of us, and respect our opinions more."