The streamer announces its ‘Back to School Collection,’ now available, as well as new and renewed series; shows coming later this month include ‘CoComelon’ Season 6, ‘Bee and PuppyCat,’ and ‘Ada Twist, Scientist’ Season 3. Netflix is sending kids and families back to school with a new and renewed lineup of animated series – so get your homework done early, make some popcorn, and enjoy some afterschool viewing fun!

Also, check out the now available “Back to School Collection.”

Here’s what’s going on this month and beyond - all titles and dates are subject to change:

With the Yokai no longer their enemies, Usagi and the gang enjoy a short-lived peace but soon must prepare for an invasion by evil aliens. On a charming magical island, the impulsive Bee and her furry pal get up to all sorts of adventures while working for an intergalactic temp agency. Pint-sized scientist Ada Twist and her two best friends are asking big questions — and working together to discover the truth about everything! Fetch — a new planet for us all! With Earth in danger, desperate scientists send genetically enhanced dogs into space to find a new world to call home. New songs and adventures await in Hansberry Heights as Karma rhymes her way through bigger challenges and shows up for her family, friends, and community. While investigating the legend of the mythical Pokémon Arceus, Ash, Goh, and Dawn uncover a plot by Team Galactic that threatens the world. 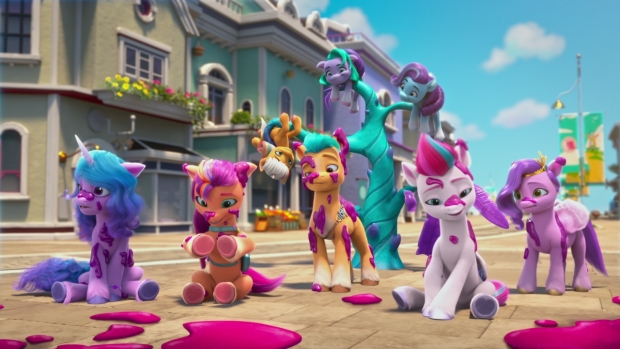 My Little Pony: Make Your Mark

When these sure-footed friends stick together, their magic is even better! Welcome to Equestria, where every pony belongs.

Chip’s ongoing kindergarten adventures have her trying new things, making new friends, and even traveling to new places – all with help from her secret mouse pal, Potato. (Images)

Henry Selick and Jordan Peele’s new stop-motion film is a tale about scheming demon brothers Wendell and Wild, who enlist the aid of 13-year-old Kat Elliot — a tough teen with a load of guilt — to summon them to the Land of the Living. But what Kat demands in return leads to a brilliantly bizarre and comedic adventure - an animated fantasy that defies the law of life and death, all told through the handmade artistry of stop motion.

Check out Netflix Sets Dates for ‘Pinocchio,’ Wendell & Wild’ and Other Feature Releases to see what else the streamer has up its sleeve in the animated feature department.