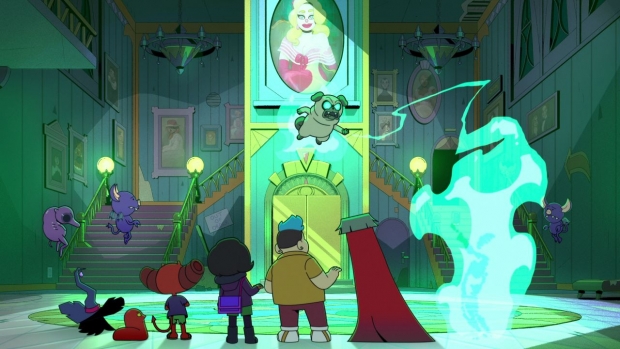 Netflix has dropped a “Sizzle Reel” teasing an extensive slate of new and returning animated kids’ shows and images. The news comes on the heels of reported cancelations by the streamer of several animated kids' series in development, including Dino Daycare and Boons and Curses, as well as Pearl, which was set to be the first from Markle and Prince Harry’s new content house, Archewell Productions.

Home to fan favorite franchise spin-offs such as the hugely popular Jurassic World: Camp Cretaceous and Boss Baby, the streamer is adding new animated adventure series inspired by other popular franchises including the Sonic Prime, Kung Fu Panda: The Dragon Knight and My Little Pony: Make Your Mark. Returning favorites include a new Jurassic World interactive special and new episodes of The Cuphead Show!, Sharkdog, and He-Man and the Masters of the Universe. The Boss Baby: Back in The Crib (On Netflix May 19) Season 1

Following the events of The Boss Baby: Family Business, Theodore Templeton is framed for embezzlement and forced to revert to his old Boss Baby self and crash with his brother Tim and his two nieces, brainy big kid Tabitha and fellow Baby Corp employee Tina. Together, Boss Baby and Tina co-lead a new Field Team fighting to increase Baby Love while keeping a new group of arch-nemeses - The Uncuddleables - from destroying Baby Corp itself.

My Little Pony: Make Your Mark Chapter 1 (On Netflix May 26) - When Zipp realizes that the power of the crystals is fading, she goes on a mission to figure out why. Daniel Spellbound Season 1 - In modern day New York City, magic is real - it's just hidden from the public. But Daniel Spellbound knows just where to find it. Making his living "tracking" hard to find magical objects, Daniel catches the attention of the wrong people when he discovers a rare artifact and suddenly the fate of magical world hangs in the balance.

Dead End: Paranormal Park Season 1 - Based on Hamish Steele’s horror-comedy graphic novels “DeadEndia” and web short Dead End, the all-new series follows the adventures of Barney, Norma and magical-talking-dog Pugsley, as they balance their summer jobs at the local theme park haunted house while battling the totally real supernatural forces that dwell within it. Together with their guide to the underworld multiplane, a sardonic thousand-year-old demon named Courtney, they'll face zombie mascots, demonic game show hosts, sleep-sucking witches, and the scariest thing of all: their first crushes! Kung Fu Panda: The Dragon Knight Season 1 - When a mysterious pair of weasels set their sights on a collection of four powerful weapons, Po must leave his home to embark on a globe-trotting quest for redemption and justice that finds him partnered up with a no-nonsense English knight named Wandering Blade. Together, these two mismatched warriors set out on an epic adventure to find the magical weapons first and save the world from destruction — and they may even learn a thing or two from each other along the way. Sonic Prime Season 1 - The 24-episode animated adventure for kids, families, and long-time fans draws upon the keystones of the brand and features the “Blue Blur” of video game fame in a high-octane adventure where the fate of a strange new multiverse rests in his gloved hands. Sonic’s adventure is about more than a race to save the universe, it’s a journey of self-discovery and redemption.

Oni: Thunder God’s Tale Season 1 - In a world filled with the oddball gods and monsters of Japanese mythology, one of the creature's free-spirited daughters, Onari, is determined to follow in the footsteps of the mighty heroes of lore, but her unique powers are yet to be revealed. Does she have what it takes to protect her peaceful village from the encroaching presence of the mysterious “Oni” who threaten the gods?

Creator/showrunner is Daisuke “Dice” Tsutsumi with Robert Kondo, Kane Lee, and Zen Miyake serving as executive producers. The show is produced by Sara Sampson with animation by Tonko House.

Super Giant Robot Brothers Season 1 – Two giant robots discover they are brothers, as they help defend Earth from the forces of intergalactic evil.

The series is produced in partnership with Reel FX Originals and from creators and executive producers Victor Maldonado and Alfredo Torres (Love, Death + Robots, Trollhunters). Also serving as executive producers are Jared Mass and Steve O’Brien with Tommy Blacha as showrunner. The show is directed by Mark Andrews.

Jurassic World Camp Cretaceous: Hidden Adventure – A standalone interactive adventure - The campers, desperate for food, work together to find a hidden stockpile. They must risk everything to uncover clues in search of its location, ultimately exposing previously unknown secrets of Isla Nublar. My Dad the Bounty Hunter Season 1- The action-comedy series follows the toughest bounty hunter in all the galaxy, a man with razor sharp skills but also a secret - his family on Earth has no idea what he does for a living. So, when his two kids accidentally hitch a ride into outer space and crash his latest mission, they discover that their average Dad's job is anything but boring. Dodging dangerous aliens and laser fights galore, this family bonding time goes to the extreme. Wait until mom finds out…

We Lost Our Human – An interactive comedy adventure about two indoor pets. A cat named Pud and a dog named Ham, who wake up one day to find that all humans have seemingly disappeared from planet Earth! Desperate to find their owner, these two domesticated pets venture out into the world for the first time to discover strange mysteries, meet bizarre creatures and maybe save the universe along the way... New episodes/Seasons of current popular series coming this year include: