Nine new episodes of animated fantasy series will continue the adventures of the show’s young heroes in their quest to stop an historic conflict from escalating into all-out war. 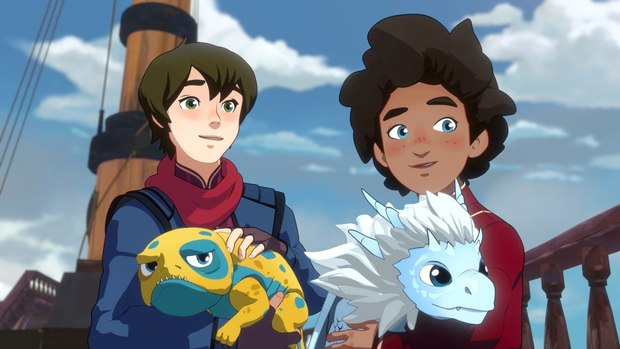 Wonderstorm, creators of the Netflix Original animated fantasy series, The Dragon Prince, has announced that Season Two will premiere on February 15, with new characters, new adventures and new challenges for the show’s young heroes as they race to stop a centuries-old conflict that even kings and queens have failed to resolve.

The nine-episode second season follows Rayla, Callum and Ezran as they continue their adventure to Xadia. But the journey won’t be easy: every step of the way, they’ll be challenged by new foes and old friends alike. They’ll struggle with trust and betrayal, face down vicious dragons, and be tempted by the lure of dark magic, all while protecting the newly-hatched Dragon Prince, Zym.

The series is led by co-creators Aaron Ehasz (head writer of Avatar: The Last Airbender) and Justin Richmond (game director of Uncharted 3), with Giancarlo Volpe serving once again as executive producer. If the new season follows in the first season’s footsteps, expect a lushly animated show that integrates cel-shaded 3D characters with a mix of painted and 3D backgrounds. According to the creators, in an AWN interview last fall, “The style incorporates the best of both traditional and CG animation. The CG characters allow for more detail, but the cel-shading gives it the charm of hand-drawn animation. The Dragon Prince has both the richness and more complex visuals we’ve come to expect in animated Netflix episodics, as well as the iconic ‘animating on 2s’ minimalist anime-styled action that so many fans adore.”

Season One premiered this past September 14, and immediately topped popularity lists across Google, Rotten Tomatoes, and Tumblr. Lauded for the diversity of its characters and deeply layered storytelling, the show was renewed for a second season less than a month after its debut. The series’ mix of action, adventure, and humor attracted genre fans, families, teens, and animation fans of all ages.