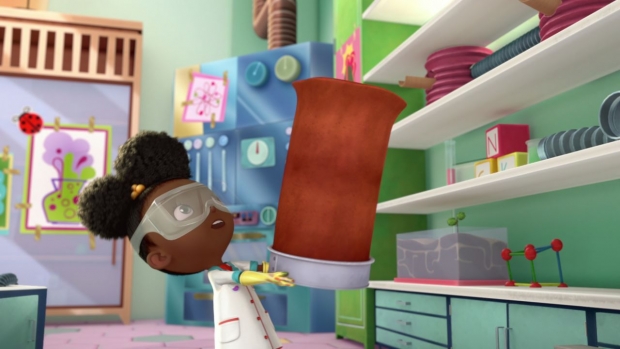 Netflix just revealed a trailer and first look images from the upcoming CG animated series Ada Twist, Scientist. From prolific Peabody, Humanitas, NAACP, and Emmy Award-winning Doc McStuffins creator Chris Nee, the new show follows eight-year-old Ada Twist, a pint-sized scientist with a giant-sized curiosity, who aspires to discover the truth about absolutely everything. With the help of her two best friends, Rosie Revere and Iggy Peck, Ada unravels and solves mysteries for her friends and family. But solving the mystery is only the beginning, because science isn’t just about learning how and why and what... it’s about putting that knowledge into action to make the world a better place.

If the trailer isn’t enough to ignite the curiosity of fans, young scientists can get ready to unravel mysteries with the pint-sized scientist by checking out two full episodes, “Cake Twist” and “Garden Party” on the Netflix Jr. YouTube Channel.

Based on the best-selling books by author Andrea Beaty and illustrator David Roberts, the series debuts globally on September 28. The show is produced in partnership with President Barack Obama and Michelle Obama’s Higher Ground Productions (American Factory, Crip Camp, Becoming), which is dedicated to powerful storytelling that promotes greater empathy, understanding and connections between people, and lifts up new, diverse voices.  Wonder Worldwide (The Christmas Chronicles) also serves as a producing partner for the show.