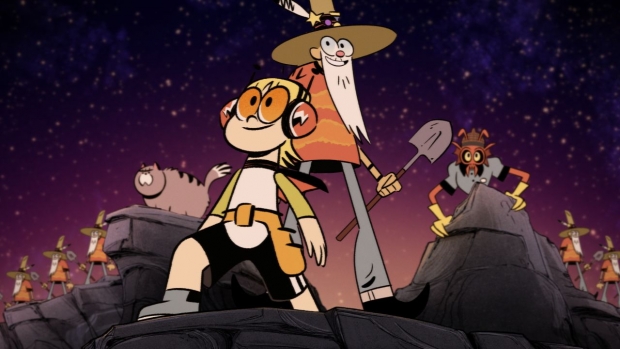 Netflix has reupped the popular 2D animated kids’ series, Kid Cosmic, for Seasons 2 and 3. Created by veteran animator Craig McCracken (Powerpuff Girls), the show originated from a 2009 “Kid Cosmic” comic strip about an odd boy who dreams of being a hero. The hand-drawn retro visual style was inspired by classic comics like “Dennis the Menace” by Hank Ketcham, “Tintin” by Hergé, and the desert landscapes of “Krazy Kat” by George Herriman.

The characters in Kid Cosmic were developed to emphasize how regular people of all ages, genders, and backgrounds can be heroes. While the comedy and action are about using powers to fight off alien invaders, the heart of the story is about learning that real heroes help, not hurt, and that you don’t need superpowers to be a hero.

In the new season, Jo learns what it means to be a true leader as the Local Heroes embark on a space adventure to find the remaining Stones of Power and save the galaxy.

“For me, making three seasons of Kid Cosmic has been one of the most creatively rewarding experiences of my career,” shared McCracken. “Working in cartoons, it’s easy to get stuck making the same kind of episodes over and over again. But with Kid Cosmic, we loved the freedom to not only make each season different, but to allow the characters to grow, to change, and to learn from their experiences. In these three seasons of Kid Cosmic, we get to explore the idea of what it truly means to be a hero, as each season focuses on a different character and a different theme. In Season 1, the Kid learns that heroes help; in Season 2, Jo discovers that heroes care; and finally, in Season 3, it is Papa G who accepts that heroes sacrifice."