Netflix Releases ‘Centaurworld’ Trailer and Images from ‘Vivo,’ ‘Karma’s World’ and ‘Back to the Outback’

In the streamer’s first big Annecy 2021 reveal, they tease four of their upcoming Kids and Family animated features and series, including projects from Lin-Manuel Miranda and Chris ‘Ludacris’ Bridges. 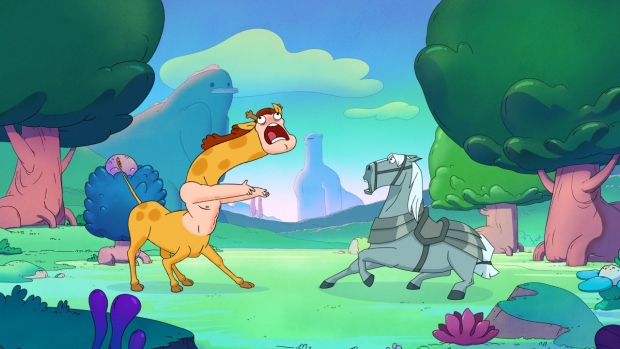 Netflix has just shared their first big Annecy 2021 reveal, with presentations and all sorts of materials on four of their upcoming 2021 Kids and Family animation roster.

First up, we get the official trailer, poster, and first look images from first-time showrunner and creator Megan Nicole Dong’s Centaurworld. Greenlit back in September 2019, Centaurworld follows a war horse who is transported from her embattled world to a strange land inhabited by silly, singing centaurs of all species, shapes, and sizes. Desperate to return home, she befriends a group of these magical creatures and embarks on a journey that will test her more than any battle she's ever faced before.

Dong was a story artist on DreamWorks Animation’s How to Train Your Dragon 2 and Captain Underpants: The First Epic Movie before becoming a supervising director on Netflix’s Pinky Malinky. She will executive produce the series alongside Dominic Bisignano (Star vs the Forces of Evil) who will serve as co-executive producer. Next, from Sony Pictures Animation, we have a set of new images from Vivo, an animated musical adventure coming this Summer that follows Vivo, a musically gifted kinkajou (aka a rainforest “honey bear”) who must find his way from Havana to Miami in order to deliver a song to his cherished owner’s long-lost love.

Directed by Kirk DeMicco, the Oscar-nominated writer and director of The Croods, Vivo stars Tony Award-winning Hamilton creator Lin-Manuel Miranda, who wrote and performs a number of new songs. Produced by Lisa Stewart (Turbo, Monsters vs. Aliens), Michelle Wong (Cloudy with a Chance of Meatballs, Hotel Transylvania 2), and Oscar-winner Rich Moore (Zootopia, Ralph Breaks the Internet), the film is written by DeMicco and Quiara Alegría Hudes (In the Heights).

Not to be outdone, we have a set of new images from Karma’s World, coming this Fall. Greenlit back in October 2020, Karma’s World is a new CG-animated musical kids’ series created by multi-award-winning American rapper, actor, producer, entrepreneur, and philanthropist Chris ‘Ludacris’ Bridges (Fast and Furious Franchise, Fear Factor, Crash).

Karma’s World follows 10-year-old Karma Grant, an aspiring musical artist and rapper with big talent and an even bigger heart. Smart, resilient, and deeply empathetic, Karma pours her soul into songwriting, channeling her feelings into whip-smart rhymes with passion, courage, and her signature brand of humor. In this series, Karma is only beginning to grasp the incredible emotional power that words and music can have. She doesn’t just want to share her music with the world...she wants to change the world with it! Back to the Outback

And last but not least, we have the debut image from Back to the Outback, an animated feature also coming this Fall. The comedy adventure marks the directorial debuts of filmmakers Clare Knight and Harry Cripps. Daniela Mazzucato produces; animation and imagery are being produced by ReelFX.

Tired of being locked in a reptile house where humans gawk at them like they’re monsters, a ragtag group of Australia’s deadliest creatures plot a daring escape from their zoo to the Outback, a place where they’ll fit in without being judged for their scales and fangs. Leading the group is Maddie (Isla Fisher), a poisonous snake with a heart of gold, who bands together with a self-assured Thorny Devil lizard Zoe (Miranda Tapsell), a lovelorn hairy spider Frank (Guy Pearce), and a sensitive scorpion Nigel (Angus Imrie). But when their nemesis — Pretty Boy (Tim Minchin), a cute but obnoxious koala — unexpectedly joins their escape, Maddie and the gang have no choice but to take him with them. So begins a hair-raising and hilarious road trip across Australia, as they are pursued by a zookeeper Chaz (Eric Bana) and his adventure-seeking mini-me (Diesel Cash La Torraca). Back to The Outback is an animated adventure that proves just because something is different, doesn’t mean it isn’t beautiful.