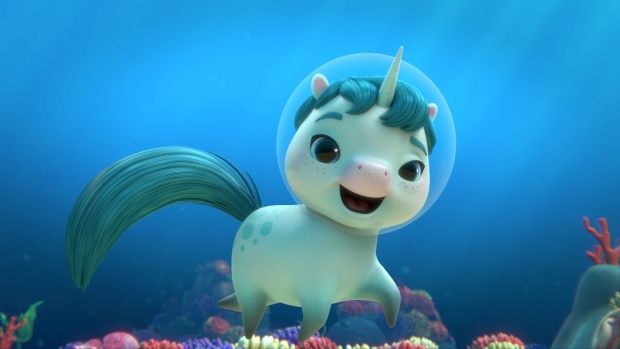 Netflix has greenlit two new animated series, Not Quite Narwhal and Dew Drop Diaries, which join the streamer’s preschool line-up that includes Gabby’s Dollhouse, which recently launched Season 4 and just received an addition 20-episode order. All three series are produced by DreamWorks Animation. Each new series received a two-season order totaling 26 episodes each.

Also launched for Netflix’s youngest audiences is Bedtime Stories with Netflix Jr., an original podcast to help little ones drift off to sleep. Coming this Spring is Netflix Jr. Magazine, a free bi-monthly magazine for kids ages 2-5 featuring their favorite preschool series and characters they enjoy on the streamer.

“Kids absolutely love the world of Gabby’s Dollhouse, and we can’t wait to bring them even more,” commented Netflix director of preschool content Heather Tilert. “Along with these new series, we are continuing to build a home for kids with characters they know and love and new friends for them to meet.” Not Quite Narwhal follows curious and fun-loving Kelp, who has always believed he's a narwhal like the rest of his family under the sea, until the day he makes the most amazing discovery - he’s actually a unicorn! Rather than choose one or the other, Kelp embraces being both a narwhal and a unicorn, juggling his day-to-day life as he figures out how to navigate his two worlds: the ocean and land.

The series is based on the like-titled children's book by Jessie Sima. Brian Roberts, Nakia Trower and Sarah Katin serve as co-executive producers.

Dew Drop Diaries follows a group of three-inch tall family fairies — or Dew Drops, as they’re known in the fairy world — who live inside teensy fairy houses on brownstone balcony gardens in “The Big City.” They have been assigned to human families to secretly help out around the house with the little things that can often fall through the cracks, like making sure your first lost tooth actually makes it under your pillow before bedtime or your favorite toy doesn’t get left behind at the park.

Gabby’s Dollhouse brings together kids' love of unboxing videos, cats, miniatures, and dollhouse play. The show is a narrative-based activity series that “unboxes a story,” leading young viewers room to room through a fantastical dollhouse with mini-worlds, irresistible kitty characters, and delightfully quirky adventures. It’s the ultimate in dollhouse wish fulfillment... shrinking down and playing inside your own dollhouse world.