Guillermo del Toro and DreamWorks Animation’s 3DCG feature, premiering July 21, unites the heroes from the ‘Trollhunters,’ ‘3Below,’ and ‘Wizards’ series as they team-up in their most epic adventure yet. 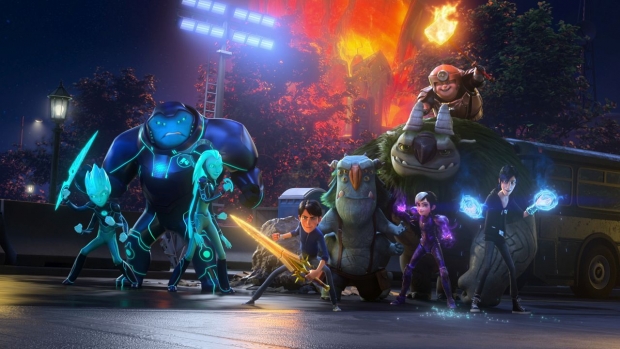 Prepare for an epic showdown in the newly released clip, “Fire Titan Vs. Gun Robot,” as Jim (Emile Hirsch), Aja (Tatiana Maslany), and Toby (Charlie Saxton) race to the scene of the newly emerged Fire Titan. They arrive just in time to see the unveiling of Eli’s (Cole Sand) secret weapon – but will it have what it takes to save the bridge?

In the film, Arcadia may look like an ordinary town, but it lies at the center of magical and mystical lines that makes it a nexus for many battles among otherworldly creatures including trolls, aliens, and wizards. Heroes from the three DreamWorks Animation series - Trollhunters, 3Below, and Wizards - team-up in their most epic adventure yet where they must fight the Arcane Order for control over the magic that binds them all.

Directed by Johanne Matte, Francisco Ruiz Velasco, and Andrew L. Schmidt, Trollhunters: Rise of the Titans is written by del Toro, Marc Guggenheim and the Hageman brothers, Dan and Kevin. The brothers also executive produce along with del Toro, Guggenheim, and Chad Hammes.